Palling Around with Rita, Frank and Kim 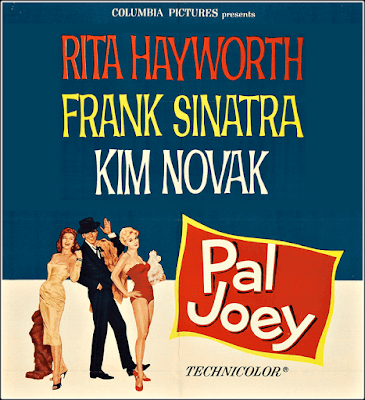 Faithful translations of Broadway musicals to film are rare—and trust me, Pal Joey (1957) is definitely not one of them. It does, however, retain a few elements of the original 1940 Broadway production with score by Richard Rodgers and Lorenz Hart, based on a book by John O’Hara (Butterfield 8)—and the talent and charisma of its three bright stars makes it a memorable movie musical experience.

Back in Hollywood’s golden age, it was common practice to buy the rights to the latest Broadway extravaganza and dispense with the original score and libretto, tack on a brand new story, add songs from other source material, maybe salvage a hit song or two from the original, tailor it to the talents of the stars involved—and then use the original title as a marketing come-on to draw in audiences.

In the 1957 film directed by George Sidney, eight of the original 14 songs are used in the film version (some as background orchestrations), and quite a few well-known Rodgers and Hart standards added, including “My Funny Valentine” and  “The Lady Is a Tramp” (from Babes in Arms) and “I Didn’t Know What Time It Was” (from Too Many Girls) and  “There’s a Small Hotel” (introduced in On Your Toes).


The chemistry of three megawatt stars, gorgeous San Francisco locations, and some of the most beautiful music ever written by American songwriting legends Lorenz Hart and Richard Rodgers, made Pal Joey a solid hit when it was released. The film helped launch the legend of Kim Novak, solidified the comeback of superstar Frank Sinatra, and marked a career transition for Columbia Pictures’ all-time top-grossing star Rita Hayworth in her final musical role.

The racy story of an amoral con man named Joey Evans who finds a meal ticket in a rich older older woman Vera Simpson while concurrently romancing a young ingenue, Pal Joey received mixed reviews in its initial Broadway run but it launched the career of a young song and dance man named Gene Kelly, who was plucked from obscurity and promptly signed to star opposite Judy Garland in the MGM musical For Me and My Gal.


Columbia Pictures bought the rights to Pal Joey a year or two later, when it was planned that Kelly would star as Joey opposite new Columbia star Rita Hayworth in the ingenue role. The role of the sugar mama/rich cougar was reportedly offered to some of filmdom’s most glamorous grande dames, including Marlene Dietrich and Mae West, but both turned it down, and the film would not be made for more than a dozen years. (Kelly, of course, would eventually star with Hayworth in 1944’s Cover Girl.)

For her role as stripper turned Nob Hill society matron Vera Simpson, Rita Hayworth garnered top billing above the title for the last time in her career, as per the terms of her Columbia contract. Superstar Sinatra good-naturedly waived his own usual top billing, so his name would appear between Hayworth and Novak.“I don’t mind being the meat in that sandwich,” he cracked.

Hayworth evokes the Love Goddess magic that made her a star with her first song, the burlesque satire “Zip.” Though the number was in the original play, it was performed by a character not in the movie, a female journalist who spoofs Gypsy Rose Lee. (In the 1952 revival, the role was played by Elaine Stritch, who brought down the house night after night with her wry interpretation of the lyrics.) In the film, it’s the perfect opportunity for Rita Hayworth to resurrect the ghost of Gilda a decade before, peeling off her elbow-length glove and tossing it to the crowd while undulating to the bumps and grinds of the burlesque drumbeat with the aplomb of a lifelong professional dancer (which she, of course, was).

Dressed by her Gilda costumer Jean Louis—who also designed for Marilyn Monroe, Doris Day and Susan Hayward among others—and still oozing glamour and sex appeal, beautiful Rita is in the flower of radiant maturity here, although in the second half of the film she wears an overcoat and a severe older-woman short hairstyle—appropriate for playing the “heavy” who comes between Sinatra and Novak and keeps them apart.

But earlier, Hayworth’s languid and sensual rendition of “Bewitched” in Vera’s bedroom has her in silky lingerie, hair wild and free…and as Rita dances into her enormous spa bath, she disrobes and steps into the shower, pressing her bare bosom against the frosted glass of the shower at the end of the number—a startlingly sexy moment for 1957 Hollywood. 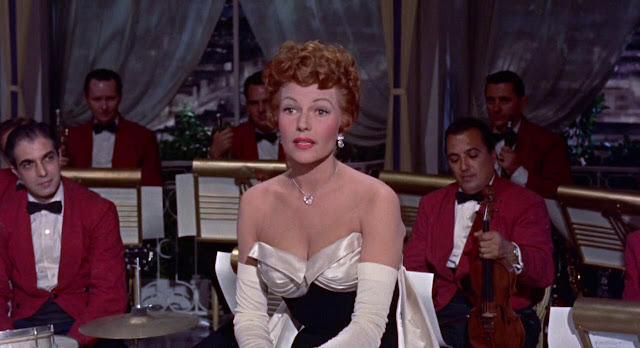 A love triangle pas de deux dream sequence was choreographed by Hayworth’s pal Hermes Pan, Fred Astaire’s personal choreographer who had staged their dances together in You’ll Never Get Rich and You Were Never Lovelier.

Despite her luminous performance, Pal Joey turned out to be the swan song of Hayworth’s musical film career and last glimpse of the Love Goddess image she had created. She was only 39, but in those days the age of 40 sounded a death knell for a female glamour star. Moving forward with her career, Hayworth had a few interesting dramatic films yet to make including Separate Tables and The Story On Page One, but she was no longer a leading lady, and her “older woman” roles became smaller and smaller, and during her final decade in film she ended up playing harridans and alcoholics. (But she imbued even these throwaway roles with humanity and vulnerability.) Hayworth retired from film in 1972 and passed away in 1987 after a long battle with Alzheimer’s disease.


Linda Christian is somewhat of a thankless role for Kim Novak, who had had meatier roles in Picnic and The Man with the Golden Arm (opposite Sinatra) and would soon become an icon herself with Hitchcock’s Vertigo and Bell, Book and Candle (both with James Stewart). But Miss Novak (still with us as of this writing) is a lovely and incandescent presence here, holding her own opposite the two veteran stars.


As Joey Evans, Frank Sinatra puts on film unforgettable renditions of, among others, “Lady Is a Tramp,” “I Didn’t Know What Time It Was” and “There’s a Small Hotel,” his sublimely silky delivery as iconic as the Rodgers and Hart standards themselves. (Hayworth’s and Novak’s song vocals were dubbed, by Jo Ann Greer and Trudi Erwin, respectively.)

Sinatra won the Best Actor Musical or Comedy Golden Globe for his performance in Pal Joey, solidifying the A-List superstar status that he had almost lost at the beginning of the decade. In the late 1940s, Sinatra’s popularity as the darling of the bobbysoxers had begun to wane, despite appearances in MGM films like On the Town and Take Me Out to the Ball Game.


His personal life was in turmoil, amid rumors of mafia involvements, the dissolution of his marriage to first wife Nancy and his volatile relationship with new flame Ava Gardner. His record sales plummeted. Depressed, stressed and down on his luck, Sinatra literally lost his voice for a time and thought his career was over. But he fought his way back. He took a non-singing supporting role in 1953’s From Here to Eternity and earned a well-deserved Academy Award, revitalizing his career. And the famous voice came back—better than ever, in fact.

Though it veers far from the Broadway original, the film version of Pal Joey is a glossy, splashy, tuneful Technicolor extravaganza that’s delightfully diverting and packed with star power—perfect for a lazy Sunday afternoon and a pint or two of your favorite ice cream.

This essay was written for the Rita Hayworth is 100 blogathon hosted by Love Letters to Old Hollywood. I look forward to reading everyone’s entries about our beloved Love Goddess!