Who's Afraid of Liz and Dick? 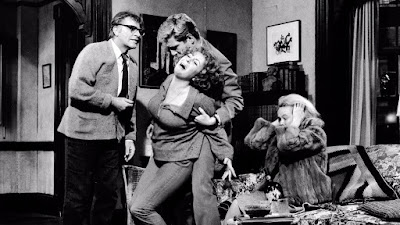 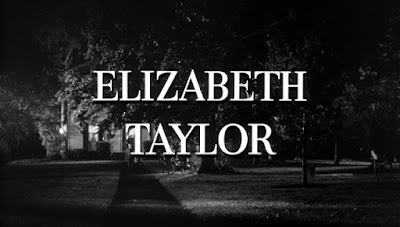 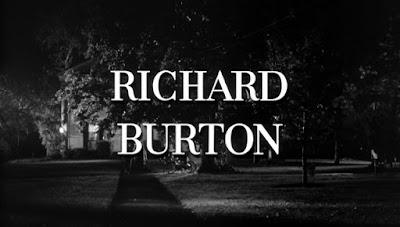 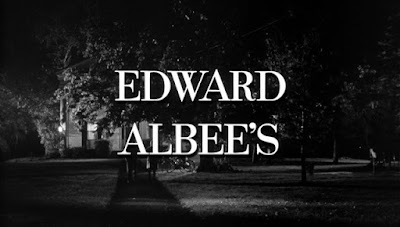 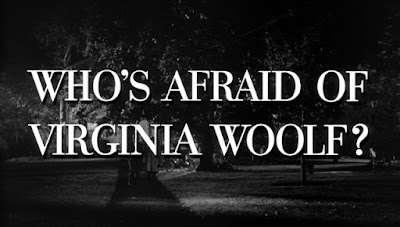 They’re movie legends who have appeared in dozens of classic films, both separately and together as a screen team. But arguably, the crowning cinematic achievement in the careers of Elizabeth Taylor and Richard Burton is the film version of Who’s Afraid of Virginia Woolf (1966) directed by newcomer Mike Nichols (The Graduate, Postcards from the Edge).

For two larger than life personalities considered more to be “movie stars” than serious actors, the casting of Elizabeth Taylor and Richard Burton as George and Martha in the film adaptation of Edward Albee’s searing play was a creative risk.

Even Burton, who once was poised to inherit the mantle of “world’s greatest actor” from his rival Sir Laurence Olivier, was taken less seriously as an artist due to his preoccupations with partying, publicity and purchasing large diamonds for his movie star wife. The poor Welsh boy’s desire for commercial success often superseded artistic fulfillment.

Burton’s life and career had changed irrevocably his first day on the set of a fabled big budget sword-and-sandals epic. Immediately he found himself with more fame and notoriety than he had ever imagined when he left his wife Sybil to pluck costar Elizabeth Taylor away from her new husband Eddie Fisher during the filming of Cleopatra in Rome in 1962.


Still, with his deep and resonant voice and studied artistry, Richard Burton reminded the world he was a classical actor with his acclaimed performance in Shakespeare’s Hamlet on Broadway in 1964, just before his marriage to Taylor in Montreal. Burton became Taylor’s fifth husband, and probably her most compatible playmate, on screen and off.

After Cleopatra, the couple appeared together in entertaining cinematic puff pieces including The VIPs and The Sandpiper, cashing in on their fame and notoriety. Burton had also turned in a powerful performance in Tennessee Williams’ Night of the Iguana as a semi-retired Liz joined him on the set in Puerta Vallarta, Mexico.

But then came a project that both actors could really sink their teeth into. Who’s Afraid of Virginia Woolf is the story of a late-night cocktail party gone terribly wrong. This is the turning point in the lives of an alcoholic middle-aged couple, the “stupid, liquor-ridden night” when George and Martha go too far in “walking the wits” of their “vile, crushing marriage” for a young couple they’ve invited over for a nightcap. This is the night when the slender thread between truth and illusion snaps.

The 1962 Broadway production of Virginia Woolf had starred Uta Hagen (The Other, Reversal of Fortune), George Grizzard, Arthur Hill and Melinda Dillon (Close Encounters of the Third Kind), and took place in a single claustrophobic living room set.

Screenwriter and producer Ernest Lehman, who had just brilliantly adapted the Broadway hit The Sound of Music to the silver screen, exercising his flair for transforming stage plays with his cinematic storytelling techniques, took another risk by hiring young stage director Mike Nichols to helm the film upon on Elizabeth Taylor's recommendation. On Broadway, Nichols had just directed the Neil Simon hit Barefoot in the Park after starting his showbiz career as half of a stand up comedy team opposite the brilliant writer Elaine May.

Edward Albee’s masterfully poetic use of language is unparalleled here—this is probably the playwright’s masterpiece, though A Delicate Balance and Zoo Story do come close to Virginia Woolf’s perfection. Punctuated by very dark humor, peppered with literary allusions and set off by four-letter words and singsongy baby talk, Albee’s dialogue is rich, dense and often brutal.

It was said that Albee, a homosexual, had used the drunken verbal brawlings of bitter gay men to bring his characters of George and Martha to life, but Albee never dignified those notions with an answer. His poetic, intricate, searing use of language was universal in its ability to connect with the audience.

Cast opposite the Burtons as the young Midwestern couple who are invited for an after hours nightcap were George Segal and Sandy Dennis. The chemistry among these four fine actors is truly remarkable as they bring four iconic characters to vivid life: The loud and obnoxious Martha, the ineffectual and embittered George, the ambitious and socially correct Nick, and the high-strung and tightly wound Honey.

George is Richard Burton’s most difficult and rewarding role. The handsome and heroic Burton, who had played King Arthur and Marc Antony, is transformed into a beleaguered, henpecked milquetoast in a frayed sweater, whose sonorous voice quavers at first and then finds strength as he becomes angrier and surlier and more empowered as the evening wears on. Burton is masterful in all his pas de deux with the other actors—he has unforgettable moments with Segal and Dennis as well as Taylor.

As good-looking, well-built new associate professor Nick, George Segal is less flamboyant than harridan Martha, poetic George and high-strung Honey, but it is his attempt to remain calm in the face of a storm that holds the story together. It is Segal’s most subtle and effective performance.

Sandy Dennis is a revelation as the young wife who reveals layers of complexity as she becomes more and more soddenly drunk on sip after ladylike sip of brandy, until she’s literally foaming at the mouth and nose. Her skilled performance made Dennis the go-to actor for any female character labeled as “neurotic” in a script. Nobody ever played it better.

Elizabeth Taylor was one of Hollywood’s most underrated actresses, uniformly giving wonderful performances in film after classic film, from Father of the Bride to A Place in the Sun to Giant. The Academy finally began to recognize and acknowledge her talents in the late 1950s, when she was nominated as Best Actress four years in a row from 1957-60. Ironically, Taylor had won her first Best Actress Oscar for a role that she felt didn't deserve the honor, as a call girl in the tawdry melodrama Butterfield 8. (Taylor had been near death with pneumonia during the Academy voting process and won the sympathy vote.)

Here, Elizabeth has a field day as the domineering, foul-mouthed Martha. Making the film in 1966, Taylor was only 34 and in lush, full womanhood, still the greatest beauty the silver screen had ever known.  Costume designer Irene Sharaff (who won an Oscar for this film), hairdresser Sydney Guilaroff and makeup wiz Gordon Bau transformed Liz’s look to make her appear 15 years older and 20 pounds heavier with with makeup and padding. (And for the first time, Elizabeth stopped watching her weight and packed on some real pounds as well, the beginning of a lifelong battle of the bulge that would last the rest of her life.)

How did Ernest Lehman get the controversial script past the censors? It was said he substituted phonetic spellings of the swear words (gah-dam or g’dam for goddamn, for example) in the script he submitted for approval, but this film marked the the beginning of a new era in film frankness. Producers and studios basically began to thumb their noses at their own self-imposed censorship and tell adult stories they felt needed to be told. Though Virginia Woolf was not rated at the time of its release, the film was one of the main reasons that the Motion Picture Association of America came up with its (constantly evolving) ratings system that is still used to this day.

Nominated for 10 Oscars, Who’s Afraid of Virginia Woolf won a total of five. Elizabeth Taylor was pleased to have won her richly deserved second Best Actress Oscar for playing Martha but then cursed the Academy for passing over her husband. Burton did win the BAFTA for his role of George, but lost the Oscar to Paul Scofield in A Man for All Seasons. Richard Burton was never to win an Academy Award, despite a total of seven nominations, the last two for his roles in Anne of the Thousand Days (1969) and Equus (1977).

Sandy Dennis (The Out of Towners, Come Back To the Five and Dime, Jimmy Dean, Jimmy Dean) won for Best Supporting Actress as the high-strung Honey, while Segal (The Owl and the Pussycat, It’s My Party) lost the Best Supporting Actor statuette to Walter Matthau in the Billy Wilder comedy The Fortune Cookie. (Haskell Wexler, Richard Sylbert and Irene Sharaff were the other Oscar winners.)

Together, Taylor and Burton would never experience a critical and artistic triumph on the scale of Virginia Woolf, though they were lauded for their fine performances in Zeffirelli’s production of Shakespeare’s Taming of the Shrew a year later. Resounding flops like Boom, Doctor Faustus and Hammersmith Is Out made the screen team box office poison, though they both found some success working separately. All told, Elizabeth and Richard would make a total of 10 films together. But Virginia Woolf was the zenith of their screen partnership.

Both alcoholics themselves, the Burtons’ hard-drinking jetset lifestyle led to constant bickering and battling, and in the end they became very much like the Albee characters they had inhabited so skillfully. The were never quite able to shed those personas, offstage or on.

In particular, Elizabeth added a new earth mother dimension to her sex goddess image, providing a perfect transition into character roles that ensured her career longevity. Most of Taylor’s more showy roles to come, including Michael Caine’s scorned wife in X, Y and Zee and the gaslighted heiress in the suspenseful horror flick Night Watch, featured shades of Martha.

Off the screen, Burton and Taylor tired of playing sparring partners and divorced in 1974 after 10 years of marriage, then briefly remarried and quickly divorced again in 1976. As actors they would team up just one more time after their final breakup, for a brief Broadway run of Noel Coward’s Private Lives in 1983.

In her later years, Taylor rhapsodized about both Burton and Virginia Woolf, calling him the love of her life and this film her all-time favorite acting experience. It is indeed a masterpiece in filmmaking; everyone involved was truly at the top of their game.

This is an entry in RealWeegieMidget’s Regaling About Richard Burton blogathon. I look forward to reading all the entries about one of the silver screen’s greatest leading men!