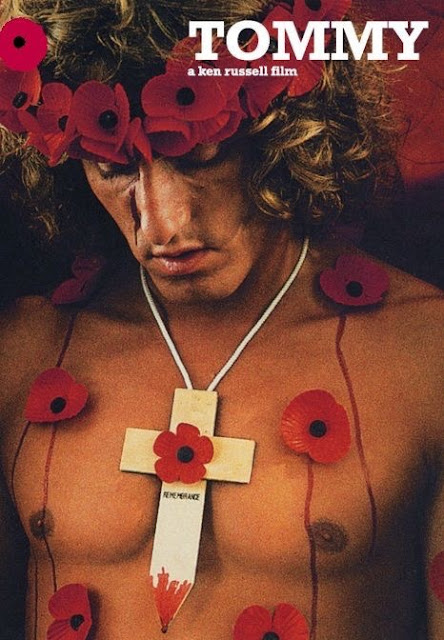 One of the most iconic rock bands of all time steps off the concert stage and onto the silver screen in one of the wildest film trips in cinema history. In Tommy (1975) The Who (guitarist and composer Pete Townshend, lead singer Roger Daltrey, drummer Keith Moon and bass player John Entwistle) bring their 1969 “rock opera” to life with the help of avant garde film director Ken Russell and producer Robert Stigwood (Saturday Night Fever, Grease).

Chock full of wild, wigged out, psychedelic imagery, Tommy is a movie musical like other, a cinematic feast providing a kaleidoscopic palette that brings the rapturous rock melodies of Pete Townshend’s rock masterwork to vivid life.

Director Ken Russell creates a detailed tapestry, a mosaic of dazzling imagery to to match the bold driving excitement of Townsend’s words and music. The production design is lavish, featuring costumes by Russell’s wife and collaborator Shirley (who would receive Oscar nominations for her designs for Agatha and Reds) and dreamlike, colorfully surreal settings.


Laden with religious symbolism and New Age iconography—mirrors, ball bearings, pinballs and disco balls juxtaposed with crosses, crucifixes and red poppy flowers—Tommy explores the themes of false idolatry, the exploitation of faith, the commoditization of talent and the superficial allure of fame and fortune in epic fashion.

Like The Miracle Worker’s Helen Keller, Tommy is a deaf dumb and blind kid stumbling through life on instinct and intuition until a sudden breakthrough sends him on a spiritual odyssey. Only his sense of touch is unimpaired as a result of his childhood trauma. Salvation comes through his affinity to the game of pinball (a worldwide craze in the mid 1970s). 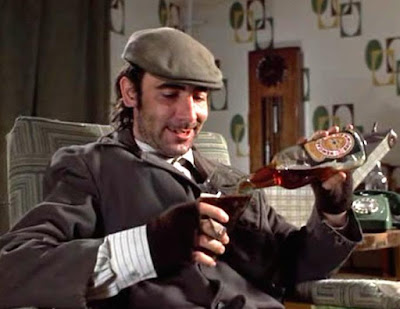 Russell’s flamboyant, over-the-top style often resulted in epic filmic fails, including the glitzy and garish Valentino, The Boy Friend and Lisztomania (which also starred Roger Daltrey but failed to capitalize on Tommy’s success), but Tommy is arguably the auteur’s masterpiece (though others may prefer Women in Love or The Devils). Here, Russell is clearly highly inspired by the material of 1969 rock album.

The Who and Russell invite a bevy of rock, pop and Hollywood stars to help them tell their irreverent and satiric (but often moving) story of the severely traumatized child who becomes “The New Messiah.” 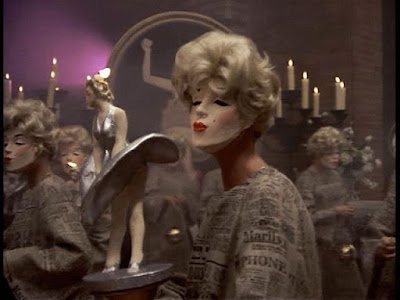 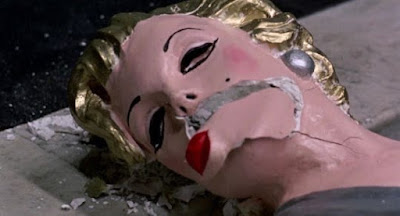 Hired to babysit the disabled Tommy while his middle class parents try to live a normal life, British actor/pop star Paul Nicholas scores in his cameo as evil bully Cousin Kevin, while perverted Uncle Ernie (perfectly played by The Who’s own Keith Moon) pantomimes the sexual abuse of Tommy in broad comedic strokes.

Tina Turner’s nightmarish turn as the Acid Queen is imposing and impressive, and it’s a shame Miss Turner has not done more film work to date (although she would grace the silver screen again memorably in Mad Max: Beyond Thunderdome a decade later). And glam rock superstar Elton John seems right at home as the Pinball Wizard dethroned by Tommy, and makes that song his very own. 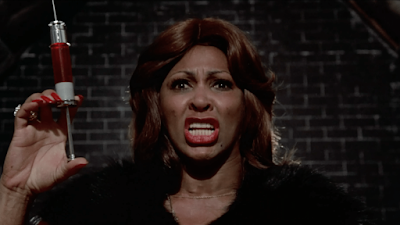 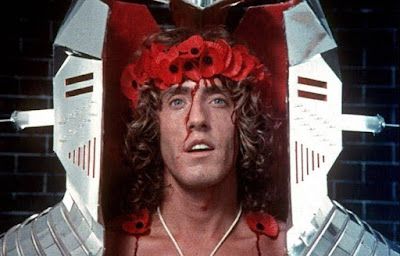 Tommy earned a Best Actress Oscar nomination for Ann-Margret for her showy, dazzling and bombastic performance as Tommy’s mother Nora. Tackling the rock music with gusto, the squeaky clean star of State Fair and Bye Bye Birdie, having already swiveled her hips in sync with Elvis Presley (and almost stealing Viva Las Vegas away from the King) a decade earlier, adds dysfunctional femme fatale to her cinematic persona with this iconic performance.

Margret’s set piece is stunning and unforgettable: As Pinball King Tommy climbs in popularity all over the airwaves, a guilty and drunken Nora patrols her white-on-white bedroom suite draped in white fur and a silvery white formfitting catsuit, in clutching anxiety, trying to avoid her son’s image on the TV. The all-white bedroom is swathed in immaculate white satin and plush white shag carpet. She throws her bottle of Veuve Cliquot at the TV screen and her false white cleanliness is shattered.

Her downward spiral into desecration and filth is explosively materialized as the room is flooded with the stuff of the TV commercials she’s been viewing, first spewing a river of white soap suds, then unlovely geysers of baked beans and dark chocolate. Margret’s Nora writhes and revels in the dirty mess till finally only a small bunch of white carnations she clutches remains clean and pure. 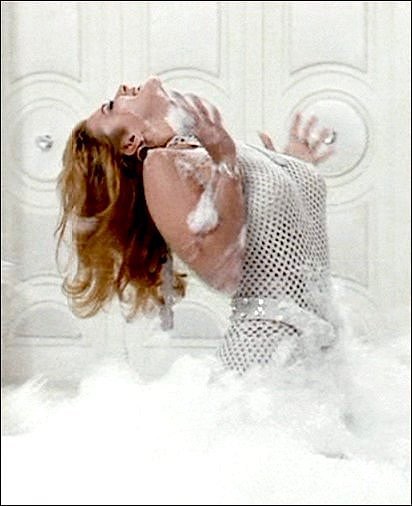 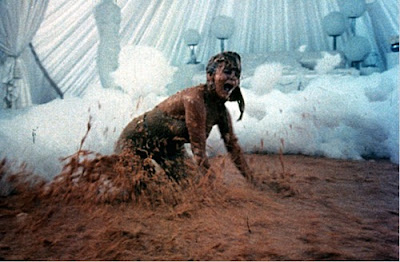 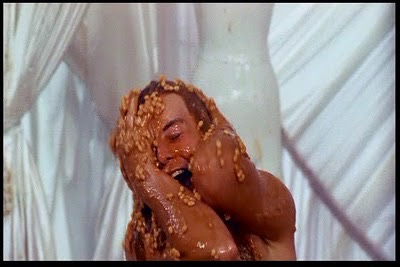 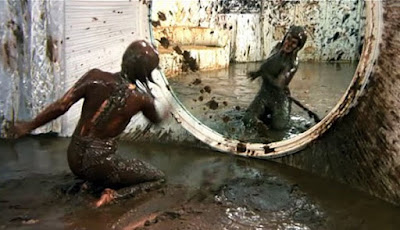 Another outrageous and stunning tableau is built around the song “Eyesight To The Blind”: Guitar-strumming clergyman Eric Clapton leads the Church of Marilyn Monroe, where multitudes are healed by the doomed sex goddess’s own lethal cocktail of booze and pills, administered by eerie Monroe-masked priestesses.

Critics will note that the movie soundtrack is musically inferior to the raw rich tones and driving rhythms of the original album, sung largely by Daltrey and Townshend. Here, we depend on the charisma of the eclectic cast to put over Townshend’s complex rock compositions, with mixed results.

As Tommy’s stepfather Frank, Oliver Reed (who famously wrestled nude with Alan Bates in Russell’s Women in Love) was obviously hired here for his acting chops rather than his vocal aptitude, and that severely damages the film’s musicality (but adds comic relief). We find out exactly why Oliver Reed’s one song as Bill Sikes was cut from Oliver! as we are subjected to his hoarse, atonal warbling throughout the film, ruining some of Townsend’s most melodic tunes!


The faulty, flat and breathy rendition of “Go To The Mirror” by the normally in-control Jack Nicholson (who starred as Ann-Margret’s paramour in Carnal Knowledge) as Tommy’s doctor makes Oliver Reed sound like Frank Sinatra in comparison.

Margret belts with passionate abandon, but her voice is more suited to pop and musical theater rather than hard-driving rock, and her camp stylings and and glam visuals are far more stimulating than the vocals captured on the soundtrack.


As well, the arrangements themselves lack the grit and depth of the beloved original 1969 record with the addition of ’70s-style synthesizers as well as the obligatory orchestral movie scoring (which nevertheless earned Townshend a Best Score Oscar nod).

There are, of course, notable exceptions: The soundtrack is bolstered by Elton John’s powerhouse performance of “Pinball Wizard” which became the film’s biggest chart-topper, and Tina Turner’s exciting interpretation of “Acid Queen” in her own inimitable style. 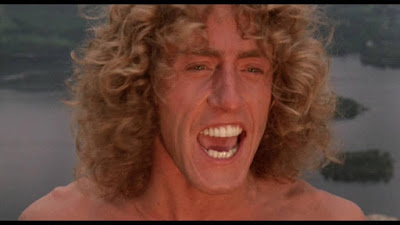 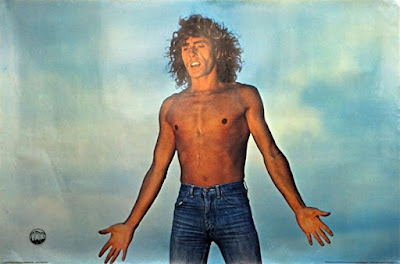 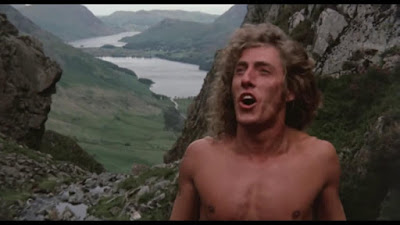 It’s a striking film debut for The Who’s lead singer Roger Daltrey in the title role. As Tommy, Daltrey is the embodiment of the rock love god of the 1970s, with cascading blond curls tumbling over his bare tanned shoulders as he soulfully implores his audience to “See me/feel me/touch me/heal me.” (The singer’s muscular physique is shown stripped to the waist at every opportunity, sending 1970s teenage hearts aflutter and shooting adolescent hormones into the stratosphere.)

Not just superficially photogenic, Daltrey reveals a strong affinity for the camera and the medium of film as he commands the screen with all his musical talents at his disposal, resulting in a solid performance.

Though his long association with The Who has remained the backbone of his decades-long career, Tommy gave Daltrey a case of the acting bug. In addition to starring in Ken Russell’s next film, another title role in the disastrous Lisztomania, Daltrey has appeared in dozens of non-musical roles in film and television over the years, including The Legacy, Highlander and CSI.

A harbinger of the MTV music video era just ahead on the horizon, Tommy is one of the first films to match up rock music with cinematic imagery and present a complete narrative. A couple of years later, the epic failure-turned-guilty pleasure-cult classic Sgt. Pepper’s Lonely Hearts Club Band, also produced by Stigwood, attempted but failed to capitalize on Tommy’s success and capture audiences. Almost two decades after the film, the rock opera also spawned a Tony Award-winning 1993 musical.

This unforgettable film leaves indelible impressions on the mind and continues to influence pop culture to this day. 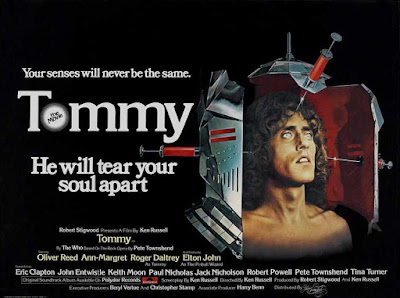 This is an entry in RealWeegieMidget’s Pop Stars Moonlighting blogathon. It’s been a delight to cover this great film, and I am looking forward to delving into this rich subject matter as seen through the sharp lenses of my fellow movie bloggers!