The Other Side of Doris 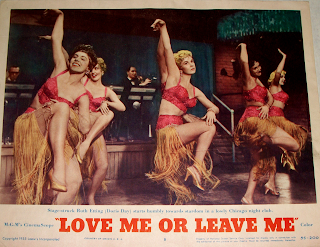 The very name Doris Day conjures sunshine, happiness, sweetness and light. She brought smiles to the faces of millions with her ebulliently positive persona, wholesome good looks and angelic singing voice. Eternally, she’ll be known as the epitome of the girl next door...an image manufactured by Hollywood but largely embraced by the star herself, a down-to-earth midwestern girl from Cincinnati. In the Eisenhower ’50s, Day’s purity and virtue were held in high esteem, but that didn’t stop pianist and wit Oscar Levant from caustically joking that he knew Doris Day before she was a virgin. Her apple-pie image made her a star...but pigeonholed her into too-often bland film roles.

A natural actress, Day rarely had the opportunity to exercise her strong flair for drama, except for a few non-singing forays into the mystery and thriller genres. Personally, I prefer her work in films like Hitchcock’s The Man Who Knew Too Much, Julie and Midnight Lace to either her early Warner Brothers musicals or her frothy 1960s sex comedies with Rock Hudson, Cary Grant and James Garner. Day always sparkles, but often in spite of her material. 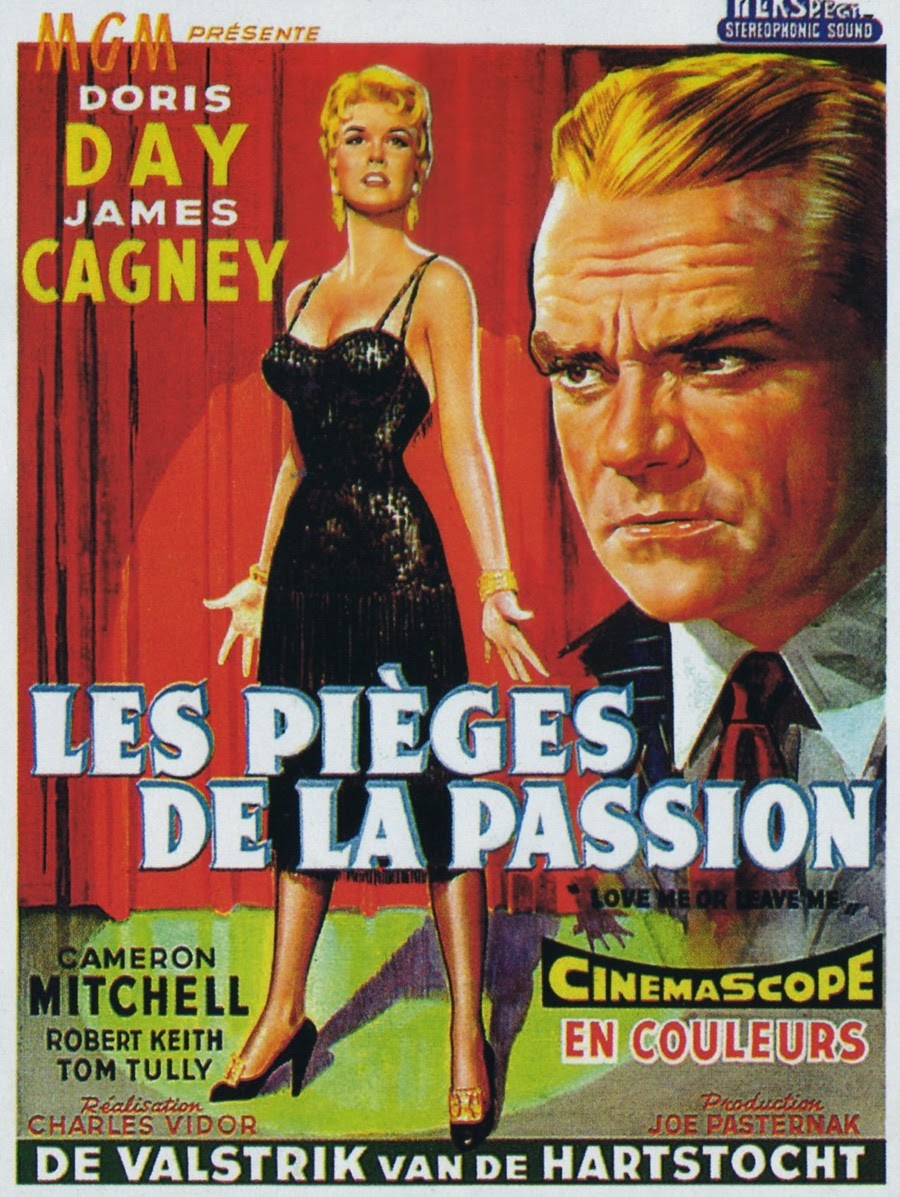 But what is arguably Doris Day’s greatest film performance combines both her musical and dramatic skills. As Ruth Etting in the biopic Love Me Or Leave Me (1955), Doris Day cemented her status as a lasting superstar by playing decidedly against type. Day’s first film as a freelance star, after a seven-year-long indentured servitude as a contract player at Warner Brothers, Love Me or Leave Me boasts a strong script, a juicy role for Doris, a selection of musical standards for her to sing, lushly arranged in high-MGM style, and a legendary costar who kept her on her toes in some highly dramatic scenes. 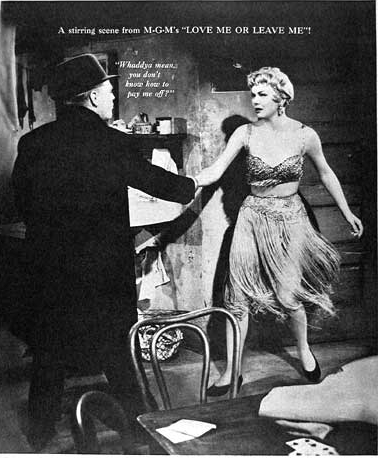 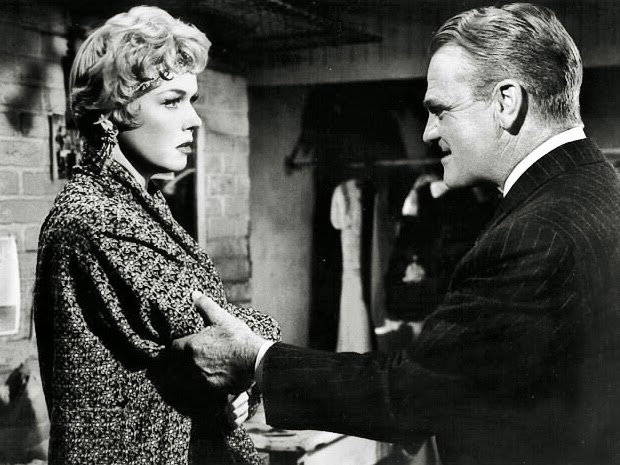 This film truly crackles with excitement in Day’s scenes with James Cagney, who plays Ruth Etting’s aggressive, crude and domineering manager husband, Marty “the Gimp” Snyder. Doris more than holds her own against Jimmy, one of the screen’s most iconic tough guys, and the pair create remarkable screen chemistry together. The combative, love-hate relationship of Etting and Snyder is beautifully realized in the tense and gripping square-offs between Day and Cagney, both actors giving surprisingly strong performances.

As Ruth, Doris wavers between admiration and appreciation for Snyder lifting her out of the dancehall and jump-starting her singing career, and fear and revulsion at his crudity and strong-arm tactics. Day should have been nominated for a Best Actress Oscar for her triple-threat performance. The scene in which she’s reduced to utter hysteria as Cagney’s character hits her, knocks her down onto the bed and prepares to rape her (on the couple’s wedding night) is some of Day’s very best onscreen work.

It’s Cagney’s last great role, too, in which he pays homage to his own iconic image of the violent bad guy, but adds touches of humor and vulnerability that he only rarely displayed in his early Busby Berkeley musicals and his Oscar-winning performance as George M. Cohan in Yankee Doodle Dandy. For his performance in Love Me or Leave Me, Cagney earned his final Academy Award nomination as Best Actor.

The film contains some of Day’s best musical numbers, too, including one that highlights her flair for dancing as well as singing. (Day’s original ambition was to be a hoofer until her legs were crushed in a freak train accident as a teenager.) Her performance of “Shakin’ the Blues Away” in the Ziegfeld Follies sequence is fortified with verve, and while she’s no Ann Miller, Miss Day can move. She really sells it. And her vocal renditions of "Everybody Loves My Baby," “You Made Me Love You” and “Ten Cents a Dance” are utterly sublime. 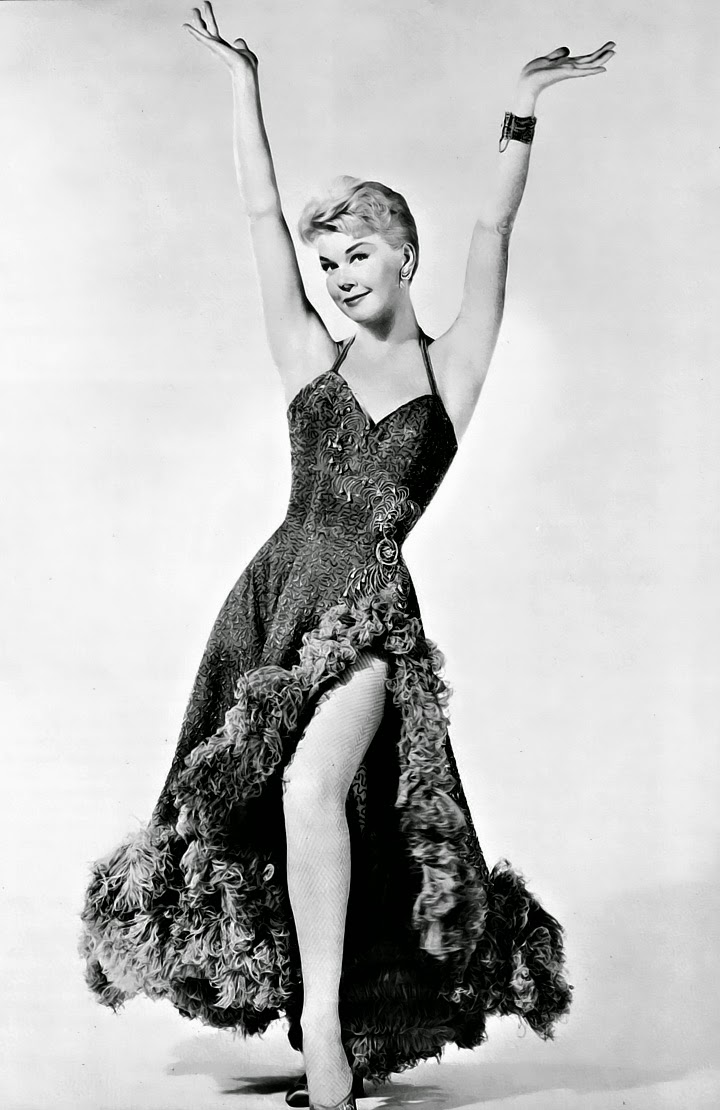 Her portrayal of a street-smart dancehall hostess smoking, drinking and carousing in nightclubs provided her a change of pace, and Doris Day garnered almost unanimous raves for her multilayered performance, but not everyone was thrilled. She actually received a considerable amount of hate mail from her conservative fan base that preferred to see her continue to play sunny virgins or dutiful wives and mothers. Day, herself a Christian Scientist who had a soda fountain installed in her home to take the place of a bar, gloried in the freedom the role gave her to explore a darker side.

If she looks a little different in this film than in any other, it’s by design. Director Charles Vidor preferred to shoot her from what she considered her “bad” side, which had a cheekier and harder look appropriate to the shrewd and ambitious character she was playing. This is the first and only film in which Day allowed herself to be photographed from the left side. (On a later picture, even the handsome Cary Grant had to accede to her request and allow himself to be filmed on his own “bad side” to accommodate Day.)

After nearly a decade of playing bland ingenues, little sister types and arm candy to male stars from Ronald Reagan to Frank Sinatra at Warner Brothers, Doris Day had reinvented herself. Soon she’d work with Hitchcock, and then begin producing films on her own with her husband and manager Martin Melcher. Four years later, she’d earn her only Oscar nod for the souffle-light Pillow Talk and begin a long reign as Hollywood’s #1 box office star. But it was as Ruth Etting in Love Me or Leave Me where she reached her cinematic zenith as actress, performer and legendary star.