For Love or For Money? 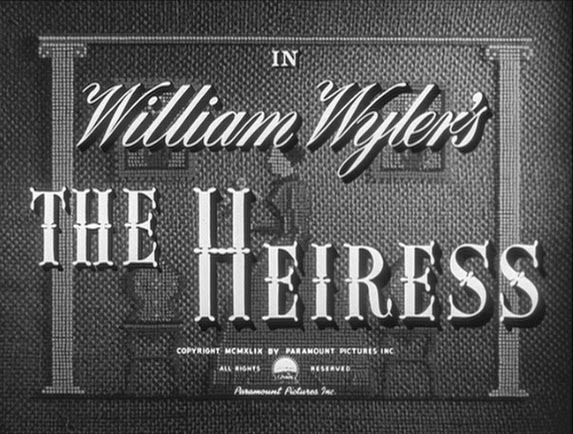 An awkward plain-Jane spinster, heiress to a vast fortune, meets a handsome and debonair yet penniless younger man. Fueled by love, the formerly introverted and obedient Catherine defies her stern and taciturn father and risks disinheritance to win her beloved Morris. But matters of the heart are rarely resolved so simply, especially when money is involved.

For The Heiress (1949), based on the novel Washington Square by Henry James and adapted into a successful play by Ruth and Augustus Goetz, legendary director William Wyler assembles a stellar cast to create one of the cinema’s most unforgettable and heart-rending love stories.

Arrestingly handsome, with his famously chiseled features and a soulful aura that belies his character’s possibly mercenary intentions, Montgomery Clift is perfectly cast as Morris Townsend, the glamorous stranger who comes to call on the maiden heiress Catherine Sloper.  Even if Morris is in fact merely an opportunist after the Sloper fortune, he is so attractive, solicitous and romantic in his wooing of Catherine that the audience believes their marriage could indeed prove harmonious and result in a happy ending for both characters. This defining early performance sent Clift into the superstar stratosphere and made him an international heartthrob, with his potent combination of acting talent and physical beauty.


Far from unlovely herself, Olivia deHavilland transforms herself skillfully into the graceless ugly duckling Catherine, courageously using the obvious age difference between herself and Clift to underline her character’s undesirability. It’s a credit to deHavilland, a great beauty and longtime screen paramour of heartthrob Errol Flynn, that she manages to convince the audience of her utter lack of attractiveness--such a handicap, in fact, that other characters in the film literally gasp when they learn that Morris is wooing Catherine. Nevertheless, deHavilland is completely sympathetic and heartbreakingly vulnerable in the role of Catherine, which makes her eventual transformation into a hard and cynical simulacrum of her father all the more startling. For this performance, Olivia deHavilland won her second Academy Award as Best Actress (she had earned the first just three years earlier, for To Each His Own).


The supporting performances are equally striking and memorable. Scene-stealing actress Miriam Hopkins, who sparred so brilliantly with Bette Davis in The Old Maid and Old Acquaintance (as well as off the screen), is now relegated to the character role of Catherine’s vivacious aunt, which of course she plays to the hilt. Hopkins is prattling, frenetic and nearly over the top, but lends a welcome dimension of humor to this romantic melodrama.

Sir Ralph Richardson, one of the most celebrated British stage actors of the 20th century, is coldly and clinically effective as the smug and self-possessed Dr. Sloper, highly respected in New York society but prone to offering left-handed compliments and nasty but veiled remarks to his only child, who lives only to please him. Sloper’s own disillusionment is based on the long-ago loss of his beautiful and virtuous wife, the memory of whom their daughter can never measure up to.  Richardson’s distinctive speaking voice, with its peculiar inflections and trills, is somewhat stagy but absolutely appropriate in his role as the pompous and humorless society doctor who threatens to cut Catherine off without a penny if she marries Morris.

Interestingly, there are no hard-and-fast resolutions to the story or answers to its big questions: Is Dr. Sloper right? Is Morris purely mercenary? Does he love Catherine at all? Should Catherine take whatever happiness, real or imagined, that she can get? Is Catherine justified in her final decision? Each viewer is allowed to form his or her opinion, and the film does not contradict the watcher’s personal viewpoint.

Thanks to the literate script, compelling performances and brilliant direction, The Heiress is an absorbing and affecting film, worthy of its status as an enduring classic.