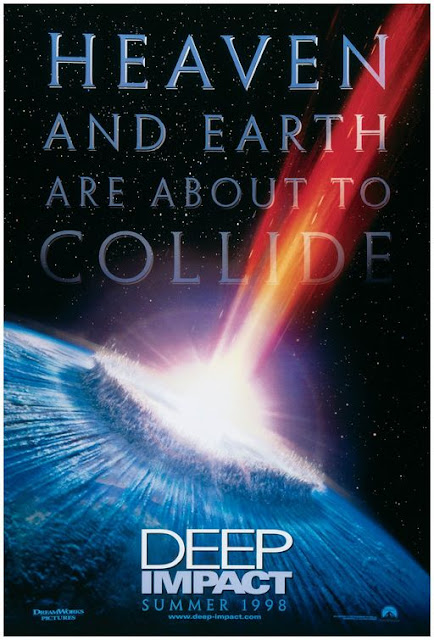 Imagine, if you can, a worldwide crisis that touches the lives of everyone on the planet, a time when “we will all entertain our deepest fears and concerns.” Sound familiar? Before the global pandemic of 2020, we needed to suspend our disbelief and use our imaginations to feel the Deep Impact (1998) of this prescient and intelligently produced disaster film. Now, a much smaller leap of faith is required to resonate with this gripping story.

The disruptive effects of an extinction level event (ELE) upon the collective psyche and societal structure as we know it are explored in director Mimi Leder’s exhilarating and thought-provoking  adventure.

Made the same year as the more action-heavy, cartoonlike Armegeddon starring Bruce Willis, Deep Impact delves beneath the surface details to explore the nuances of the human experience under the duress of a global catastrophe.


Many of the storytelling devices here will be recycled in future disaster epics including The Day After Tomorrow and 2012, albeit with less thoughtful social commentary.


But the story is largely propelled by a cast led by then-newcomers including Tea Leoni (Spanglish, Fun with Dick and Jane), Elijah Wood (Lord of the Rings), Lee Lee Sobieski (Eyes Wide Shut), Ron Eldard (E/R, Blackhawk Down), Blair Underwood (Quantico) and John Favreau (Swingers, Chef),  and ably supported by fine actors including Laura Innes (E/R), James Cromwell (Six Feet Under, Angels in America) and Dougray Scott (in a tiny early role as an MSNBC cameraman).


Before the backdrop of impending calamity, we see our all-star cast go about their busy, fast-paced lives—teenagers come of age, ambitious go-getters try to get ahead in their careers, corporations attempt to conduct business as usual—as an omniscient media shapes the narrative for maximum dramatic effect.

Tea Leoni is Jenny Lerner, an ambitious MSNBC news employee who works under self-absorbed MSNBC anchor Beth Stanley (Innes) who fears Jenny is trying to usurp her position in front of the camera.  As Jenny, Leoni has some unforgettable moments, including the All About Eve-like tension with Innes; her terrified gulping of a martini right after she learns of the ELE; her shocked and numbed reaction at the suicide of her mother (Redgrave); her touching last reel reconciliation with her estranged father (Schell). It is Jenny who discovers the government coverup of the impending disaster and becomes an international news celebrity.


Freeman is iconically cast as President Tom Beck, our first African American commander in chief a decade before Obama, exuding cool, calm and compassionate leadership in the face of intense adversity. (Small wonder that Freeman, with his sonorous voice, soulful yet stalwart demeanor and imposing physicality, was also perfectly cast in the role of God Almighty. )


When young high schooler Leo Biederman (Wood) and his classmate and girlfriend Sarah (Sobieski) discover a new celestial body in the night sky, Leo emails images and coordinates to the scientist who visited their astrononomy club, Dr. Wolf (an uncredited Charles Martin Smith) who confirms the unthinkable: The comet is a collision course with earth.


The President, pressured by Jenny Lerner’s insistent probings, finally sounds the alarm and unveils a plan to deploy nuclear weapons on the face of the enormous meteor and introduces the team of astronauts who will undertake the task.

Ron Eldard is perfect as Oren Monash, the brash and arrogant young commander who feels that the veteran elder astronaut Spurgeon “Fish” Tanner (Robert Duvall), who walked on the moon decades ago, is stealing his thunder and undermining his authority.

Even in the midst of unimaginable events, the characters react as a generation raised by television, and the film contains wry observations and commentary about fame and success. “The best thing about being a celebrity is that you have a lot of sex,” Wood’s character is told, while the young and attractive group of astronauts chosen for the rescue effort (including Eldard, Favreau, Underwood, and Mary McCormack) are “not scared of dying; they’re scared of not looking good on TV.”


The media itself, represented here by real-life network MSNBC, is a pivotal character in the story as well. How the news business uses facts and figures to craft the story and shape the public narrative is vividly illustrated. Despite the threat of extinction itself, the relentless news machine focuses chiefly on ratings and marketing tactics. “I need graphics,” screams a producer, and the newly branded MSNBC  “Earth Rescue” news report soon features a digital rendering of the comet on a collision course with earth that will “scare the shit out of people.”


To preserve “our way of life,” the existence of a vast underground bunker system (obviously having been constructed years before!) is now revealed to the public if, by some chance, the mission does not succeed.

Fame and privilege will enhance the odds of survival for notables are “preselected” for the underground caves, while the rest of the population are subjected to a nationwide lottery for those sought-after spaces in the “new Noah’s Ark.” But it’s survival of the fittest, as no one over the age of 50 will be eligible for the lottery, and millions must face the chilling realization that they will not survive the disaster.

Despite their valiant attempt to destroy the comet, the rescue mission fails, splitting the space rock into two projectiles still aimed at Earth. The astronauts decide to sacrifice their lives to save the planet by flying into the larger meteor and detonating the rest of their nukes. “Look at the the bright side,” comments McCormack matter-of-factly. “We’ll all have high schools named after us.”

As the smaller asteroid hits our planet, a tidal wave engulfs the New York skyline including the twin towers, a reminder that this is a pre 9/11 film. The special effects are quite impressive for the late 1990s (thank you, executive producer Steven Spielberg). 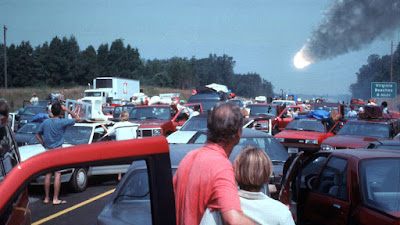 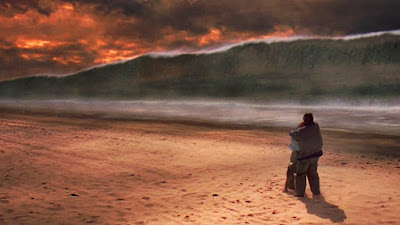 But it’s the characters we care about, and there are many touching and affecting moments as annihilation looms large.

Badly injured, blinded, and seeing things differently, Oren has a lovely and quiet scene with Fish where the two men bond in a moment of solidarity and friendship, as Tanner sits beside Monash reading Moby Dick aloud. Later, the astronauts bid tearful goodbyes to their loved ones via satellite before sacrificing themselves for the greater good.

Jenny gives up her chance at survival with an unselfish act, letting her coworker Beth and her young daughter board the helicopter to take her place in the Ark—and reunites with her estranged father (Schell) as the wall of water overcomes them both. Sarah’s parents entrust the care of their newborn baby to the teenagers and embrace as the flood waters overcome them.

The astronauts’ sacrifice turns out to be well worth it, as the larger asteroid is destroyed and humanity is given one more chance. The rebuilding begins…


Exploring some deeper undercurrents—from government secrecy, the role of the media, facing our own mortality and getting our personal priorities straight— beneath the obvious and superficial triumph-over-adversity disaster movie tropes, Deep Impact has always provided food for thought for viewers, and its message is as relevant today as when it was made more than two decades ago. Maybe even more so…

Thanks to Dubsism and my friend Quiggy at The Midnite Drive-In for hosting the Disaster Blogathon! I look forward to reading everyone’s posts and sharing ideas regarding one of my favorite film genres.