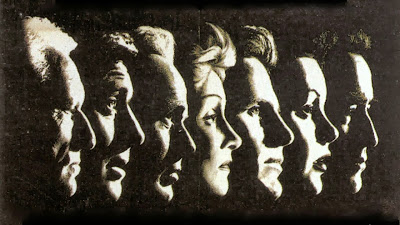 Director Stanley Kramer loved movies with a message...Guess Who’s Coming to Dinner, The Defiant Ones, Inherit the Wind. He is equally well known for his big, splashy epics with all-star casts, like It’s a Mad Mad Mad Mad World and Ship of Fools. Judgment at Nuremberg (1961) combines both of Kramer’s directorial strengths in one powerhouse of a film.

Based on a Playhouse 90 television drama with a script by Abby Mann, the film version had to be bigger and more spectacular, so director Stanley Kramer pulled out all the stops by planning location filming in battle-scarred Nuremberg itself and assembling a cast that audiences would pay admission to see in the theaters.

But Judgment is far more than a collection of stars. It provides a group of fine actors the opportunity to lay their Hollywood personas aside and sink their teeth into unusual, once-in-a-lifetime roles.


Rugged Burt Lancaster, whose career had been built as much upon his good looks and athletic physique as his acting talent, plays against type as the aging Dr. Ernst Janning, who signed into law the Nazi edicts that robbed millions of citizens of their human rights. When Janning’s resigned stoicism gives way to regret and contrition, the audience experiences a catharsis that’s a testament to the talents of a truly gifted actor.


Handsome Richard Widmark has rarely been better than as the crusading American prosecutor hell-bent on justice for the millions of Jews slaughtered during the European genocide. Self-righteous and angry, hating every moment he must spend in the enemy’s homeland, his demonization of an entire nation of people seems nevertheless justified.


Judy Garland, absent from films since 1954’s A Star Is Born and now approaching 40, is compelling in the non-singing character role of hausfrau Irene Hoffmann, who enjoyed a controversially intimate friendship with a Jewish neighbor when back in her teens.  In this small part, Garland is heartbreakingly vulnerable, a bird with broken wings. For this performance, Judy Garland was nominated for an Academy Award as Best Supporting Actress.


Montgomery Clift channels his inner demons to portray the mentally disabled Rudolph Petersen, whom the Nazi Party ordered sterilized to “cleanse” the population of debility in their quest to evolve into an Aryan super-race. Clift’s startling cameo as the halting-voiced and humiliated victim of inhuman torture is unforgettable.


Glamorous German ice queen Marlene Dietrich is perfectly cast as Mrs. Bertholt, widow of a convicted and executed officer of the German army, whose home Judge Haywood is given for the duration of the trial.  Her explanation and rationalization of Nazi atrocities summarizes the prevailing post-War German attitude toward the Holocaust: “We did not know.”

Maximilian Schell is passionate and fiery as the young attorney assigned to defend the indefensible. His skillful and articulate direct and cross examinations of witnesses, so beautifully laid out by writer Abby Mann, is highly compelling and almost succeeds in obscuring the architects of the 20th century’s most ignominious tragedies in reasonable doubt.  For his performance, Schell won the Best Actor Academy Award.

With his craggy face furrowed and his weary shoulders bowed with profound questions of right and wrong, good and evil, Spencer Tracy brings the full force of his considerable talents to bring the difficult role of the tribunal judge Dan Haywood  to life. Though it’s been often said that Spencer Tracy reduced his own film acting philosophy to one simple rule: “Find your marks and tell the truth,” there is a lot more going on here than mere technique. Tracy’s thoughtful and multidimensional performance is understated yet powerful, but melds beautifully with the introverted method-like work of Garland and Clift and the more representational portrayals of German actors Dietrich and Schell.

Director Kramer’s point of view, as seen through protagonist Tracy, allows every character of the story humanity and dignity, even those who condoned atrocities that robbed millions of those same qualities.

For lovers of courtroom drama and truly great acting, Judgment at Nuremberg is a must-see.