The Queen of Mean 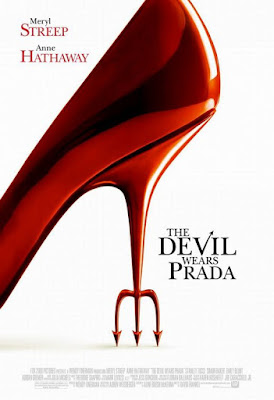 When a 2016 presidential candidate was recently described as “Lucifer in the flesh,” the first image to flash into my mind was not a politician at all, but rather a slim, elegant and impeccably dressed woman played in a movie by Meryl Streep.


Based upon Lauren Weisberger’s roman a clef novel, inspired by a stint as assistant to none other than Vogue maven Anna Wintour, The Devil Wears Prada (2006) is given a slick and entertaining film treatment by director David Frankel and features fabulous fashions, sumptuous production design and engaging performances by a bevy of attractive and talented actors. But the film really belongs to just one person, in the eponymous title role.

The character of Runway editrix Miranda Priestly joins the ranks of cinema’s greatest female bosses from hell including Joan Crawford’s Amanda Farrow in The Best of Everything, Susan Hayward’s Helen Lawson in Valley of the Dolls, and Sigourney Weaver’s Katharine Parker in Working Girl. Miranda is brought to terrifying life with brilliant precision by the most multifaceted actress of all, Meryl Streep, who earned a richly deserved Academy Award nomination for the role. (If only she had won that third Oscar for this juicy part, and not as a bucktoothed and boring Margaret Thatcher!)


Miranda Priestly is everything an iconic screen villain should be—an irresistible combination of beauty, brains and cruelty. She’s narcissistic and self-centered; talented and driven; ruthless and cold-blooded;  in short, a glamorous embodiment of pure and unadulterated evil.

Streep takes great pains to fashion a completely original character in Miranda, who looks and sounds nothing at all like Anna Wintour. Instead, Streep cleverly makes her antiheroine a soft-spoken dragon lady; her vicious putdowns and catty remarks are all uttered sotto voce, with ladylike deportment. But her murmured asides are skillfully designed for systematically belittling, criticizing and dismissing her long-suffering staff, who exist only to please her. But the mere pursing of her lips in displeasure is “a catastrophe.” Her opinion is the only one that matters.

Giving an endlessly long string of orders to her assistants in a hushed monotone, demolishing deadlines and rescheduling meetings, the Queen Bee then sighs with weary disappointment when her worker bees and drones fail to fulfill her commands quickly or efficiently enough. “It’s baffling to me, confusing to me“ she sighs in quiet exasperation, “Why is no one ready?”


Stylish, poised and supremely self-possessed, and fortified by a healthy case of borderline personality disorder, Miranda cuts a swath of pure terror through the Runway offices. Her few redeeming qualities — talent, a singular focus and a steely determination to survive in the shark-infested waters of the New York fashion pool—do little to offset her hard-as-nails persona.

Described by other characters as “a notorious sadist” who is “not happy unless everyone around her is panicked, nauseous or suicidal,” Miranda is as iconic as Cruella deVil and Mommie Dearest, minus the cartoon campiness. Streep imbues the character with disturbing reality.


Perfectly playing Snow White to Streep’s glamorous Wicked Queen is Anne Hathaway in one of her most winning roles. As fresh-faced Northwestern graduate Andrea Sachs, who reluctantly takes the job of second assistant to Miranda, Hathaway arrives fully prepared to pay her dues, but doesn’t yet realize she’ll be paying in tears, toil and blood. (And by changing every aspect of her appearance to measure up to the fashion industry’s impossibly high standards. Hard to believe that the willowy Hathaway is shamed for eating and described as “fat” by her new coworkers.)


The ice queen puts her new assistant through her paces, treating her like dirt when she acknowledges her presence at all, damning her with the faintest of praise. Like a starving animal, Andrea eagerly laps up the few crumbs of approval that are offered by her new employer. Then, in true Faustian fairy tale fashion, Andrea becomes the girl Miranda wants her to be, ditching her friends, lover and personal integrity in the process.


Though Andrea enjoys a personal happy ending, walking out on Miranda and getting her dream job as a newspaper reporter, the villain is far from vanquished at the close of this story. Ultimately, it is her power that allows Andrea to get her next job; ironically confirming that Miranda’s influence will probably continue, undiminished, perhaps indefinitely. Evil triumphs!

Though Streep and Hathaway dominate here, they’re bolstered by an impressive cast and production that make the film an utter delight to watch again and again. Brilliant supporting performances by Emily Blunt as a bitchy Miranda mini-me and Stanley Tucci as a twitchy gay fashion director (sharp-tongued but with a heart of gold, of course!) are perfect foils for Miranda and Andrea. Adrian Grenier and Simon Baker add some tempting male eye candy to the proceedings. Costume designer Patricia Field (Sex and the City) captures the fashion zeitgeist of that moment, and the soundtrack and cinematography capture the mood and magic of the New York and Paris fashion worlds.


Though Meryl Streep has aced practically every kind of role imaginable, like most actors she really seems to relish this rare opportunity to play an out-and-out evil bitch. And a decade later, it remains one of her most memorable roles.

Thanks to Speakeasy, Silver Screenings and Shadows and Satin for hosting The Great Villain Blogathon of 2016. So much fun to participate!