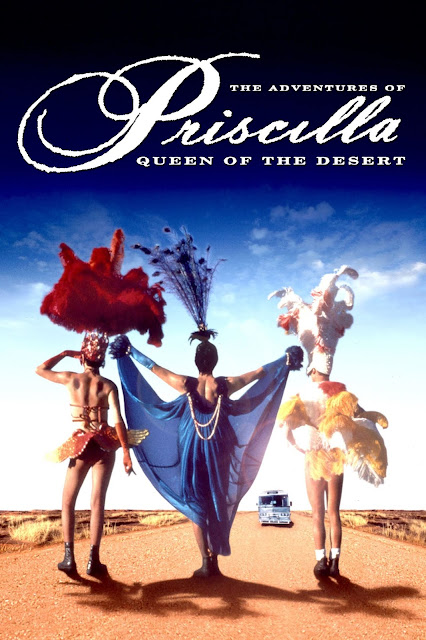 Now that homosexuality, gender fluidity and the art of drag are ubiquitous in mainstream entertainment and popular culture—witness the success of TV phenomena from RuPaul’s Drag Race to Pose— it’s hard to believe that just a short time ago, you could only find queer stories in arthouse indie films and maybe the shelves of the more adventurous Blockbuster franchises.

The Adventures of Priscilla, Queen of the Desert (1994) is a rollickingly funny yet touching gay-themed road movie. It tells the story of three Sydney drag performers as they undertake a bumpy journey of epic proportions, from their urban coastal home through the hinterlands of the desert outback. When a voice from the past sets him on a cross-country odyssey with two friends (who can’t stand each other), a lonely drag queen named Mitzi begins a vision quest of self discovery. The trio pile into a broken down bus named Priscilla loaded with sets and costumes and set off for Alice Springs via parts unknown.


Hugo Weaving (beloved to sci-fi and adventure film fans through his elegantly skilled performances in V for Vendetta, The Lord of the Rings and The Matrix) is superb here, conveying complexity, humor and heart as the deeply conflicted Mitzi (aka Tick) whose surprising secret will change the course of his life.

Terence Stamp, the British-born international sex symbol of the 1960s who played opposite superstars Julie Christie (Far from the Madding Crowd) and Jane Fonda (Spirits of the Dead) nearly steals the whole film with a subtly sardonic performance as Bernadette (aka Ralph), a recently widowed transsexual. (Fans of 1980’s Superman II may or may not recognize Bernadette as the evil Zod of Krypton: “Kneel before Zod!”)


Bernadette’s nemesis Felicia (aka Adam) is beautifully played by Guy Pearce (LA Confidential, Mildred Pierce) in a memorable breakout performance. Pearce’s Felicia manages to be hyperactive, obnoxious, flamboyantly queeny and adorable at the same time. Stripped to the waist and showing his lean musculature in several of his non-drag scenes, Pearce also provides a generous helping of eye candy.

Along the way they meet Bob the mechanic (wonderfully played by the down-to-earth Bill Hunter) and his mail order bride (a hilarious turn by Julia Cortez), and a host of other unique characters, including two important people from Mitzi’s former life.


A balls-out, no-holds-barred celebration of outrageousness in every respect, Priscilla boldly goes where no mainstream movie of the era could. In addition to its glitzy, over-the-top fabulous protagonists, it features wonderful supporting performances by a diverse bevy of Aussie character actors. Irreverence is the order of the day here—amid the many touching moments are countless scenes of indescribable outrageousness. (Don’t even ask me to describe the significance of three ping pong balls or the souvenir excrement of a famous rock star!)

Stunning cinematography spotlights the quirky originality of Australia in this universal story of love, connection and self-acceptance. Once you’ve seen Priscilla, you’ll really feel as if you’ve been Down Under. The Australian outback setting affords viewers a glimpse of the remote and sparsely populated inland areas off the beaten path, peopled by the indigenous tribes of Aboriginal natives and what can only be described as Aussie rednecks.


The eclectic and wide-ranging soundtrack spans almost every imaginable genre, from Italian opera to classic standards, ’60s pop to ’70s disco, and Abba to “Hava Nagilah,”  and includes memorably lip-synced renditions of the campy “I’ve Never Been To Me” and “I Will Survive” (accompanied by a native Aborigine didgeridoo!).

There are sober moments as well that underline the prejudice and discrimination that gay people faced in 1994 (and still do in many places), including a violent gay bashing sequence and the beloved bus vandalized with the ugly message  AIDS F***KERS GO HOME (later painted over in fabulous lavender).

Written and directed by Stephan Elliott, with Oscar-winning costumes by Lizzy Gardner and Tim Chappel, the film was transformed into a West End musical that made it to Broadway in 2011, produced by Bette Midler.

If you love Australia and are interested in a road movie with more than a twist, climb aboard and take this unforgettable journey.

Many thanks to my friend Quiggy for inviting me to join the Blizzard of Oz blogathon party—the perfect opportunity for me to celebrate Pride Month and the splendors of Australia at the same time!