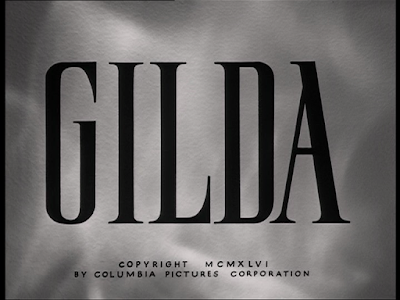 They say the love of a good woman can save a fallen man. Gilda (1946) is not about that kind of woman. It’s the story of a sultry siren who leads a man to his destruction, and with wanton malice aforethought. Masterfully directed by Charles Vidor, Gilda is textbook film noir, chock full of all the elements that define this quintessential 1940s genre.


Lurid and suggestive rather than explicit in their portrayals of the dark side of human nature, film noir provided a creative milieu in which verboten themes and subjects could be safely explored without breaking the stringent Production Code that promoted “clean and wholesome” moviemaking.

With Gilda, Vidor and cameraman Rudolph Maté pull out all the film noir stops, creating a moody, glittering black-and-white mise en scène. Set in steamy postwar Buenos Aires, the film transports the viewer to a shadowy underworld of rootless expatriate revelers who come out only after the sun goes down. (Indeed, every scene in the film takes place in the dark of night.)


All the classic elements of film noir are present and accounted for in this seminal film—a cynical worldview, sexual symbolism, the double-cross, even a Nazi subplot. Just about everyone’s pretending to be something they’re not—there’s even a masked Carnivale ball to underline the theme of falsity and impersonation. And at its apex is a poisonous love affair fueled by the most venal of impulses.

Here, Rita Hayworth and Glenn Ford display perhaps the most explosive and smolderingly sensual screen chemistry of any movie couple of the 1940s, far more than Stanwyck and MacMurray in Double Indemnity, or even Bogart and Bacall in To Have and Have Not and The Big Sleep. Both their characters are opportunistic narcissists, forced to dance to the tune of the rich and powerful to make their way in the world, bartering their assets and skills for protection and security. Survival by any means, beginning with pretense and deception, is the only goal.


Unshaven and raggedly attired, armed only with his own set of specially weighted dice, Johnny Farrell (Ford) makes his own luck by cheating his way through life. But a chance (?) encounter with a wealthy benefactor, the sinister Ballin Mundson (George Macready), sparks his ambition and gives him the opportunity for respectability and the good life. Alas, Johnny’s newfound success turns out to be even more seamy and dangerous than his former life as two-bit hustler.

Johnny visits Mundson’s underground gambling establishment and insinuates himself into the proprietor’s good graces. There he will learn the cardinal rule of gambling: The house always wins--the establishment may let you cash in up to a point, but when you cross the line, you’re out. Or maybe even dead.


Even after quickly rising to the role of casino manager and confidante to Mundson, dressed in an impeccable tuxedo and tails, Johnny is nevertheless pegged as a peasant by the wise and wily restroom attendant Uncle Pio (Steven Geray). Though under the aegis of Ballin’s protection, Johnny will never be respected.

But Johnny’s problems have only just begun, as a major complication threatens the security of his newfound berth. Mundson returns from a brief business trip with his beautiful new wife Gilda in tow—and the girl in question happens to be a former paramour with whom he did not part amicably, to put it kindly.


Gilda and Johnny’s karmic connection is based not on unrequited love and not on money. Hate and revenge are their aphrodisiacs, keeping both in a perpetual state of seething anger,  barely concealed contempt and unfulfilled sexual arousal. Indeed, in their first private moment together, Gilda whispers savagely, “You know how much I hate you, Johnny? I hate you so much I’d destroy myself to bring you down with me.” And so she will.

The diminutive and vaguely effeminate Ballin Mundson, who carries a silver-tipped cane as a substitute phallus, seems far more entranced and obsessed by Johnny than he is with wife Gilda, and studies his employee’s reaction to her with amused interest. Later, we’ll see Ballin voyeuristically spying on the lovers in flagrante delicto, while anxiously massaging the tip of his cane, which converts to a lethal weapon, an elegantly thrusting razor-sharp spear. (Voyeurism is a major theme here, beautifully illustrated by the shadow-casting electronic blinds in his office that give Mundson a birds-eye view of all the happenings in his casino and nightclub.)

At her new husband’s club, Gilda works hard to make a spectacle of herself, flirting brazenly with practically any man who shows interest— not to make Ballin jealous but to get her ex-lover and chaperone Johnny in trouble with his employer--and keep him hot, bothered and nearly frantic.


The character of hustler and pretty boy Johnny Farrell shows Ford at the flower of impetuous youth that would later give way to a more laconic, weathered and world-weary persona, but here his violent and explosive passion and desire for revenge more than match Gilda’s. In many ways, the film belongs to him. He gives a fierce performance as the hardened adventurer whose perfect setup is compromised by a dangerous doll who threatens to blow his cover.

The untamed redhead in the title role is played, of course, by Rita Hayworth (the former Margarita Cansino). After a long Hollywood buildup, during which she changed her name and dyed her dark Latina hair in various shades of red from strawberry blond to torrid sunset, Hayworth had paid her dues as an extra, bit player and featured actor. By the mid-1940s, Rita was now being recognized as an A-List star, appearing mostly in musicals and comedies opposite the likes of Cary Grant, Fred Astaire and Gene Kelly. She had played a femme fatale once or twice before, most notably in Blood and Sand opposite Tyrone Power, but here was a role that only came once in a lifetime; no wonder the publicity posters screamed, “There never was a woman like Gilda!”

Poured into a slinky strapless satin gown and breathing heavily, she sings “Put the Blame on Mame” and creates one of classic film’s most iconic moments with her titillating near-striptease. Though her vocal performance was reportedly dubbed by jazz singer Anita Ellis, Hayworth gives the song its sultry sizzle with her languid and suggestive dance moves.


The plot is too deliciously serpentine to reveal beat by beat, but suffice to say that Gilda is a gripping melodrama featuring iconic imagery, striking performances and a style that is copied in film noir homages to this day.


Though they costarred in several more films together, including The Loves of Carmen and Affair and Trinidad, plus a brief reunion years later with her cameo appearance in The Money Game, Hayworth and Ford never quite generated the same amount of raw heat as they had with Gilda.


Hayworth struggled to live up to the indelible screen image she had created. The many men in her life found it hard to separate the fiery love goddess character from the sweet, often insecure child-woman that Hayworth really was. And unlike Ford, Hayworth found it a little more rough going as she matured, often reduced to playing alcoholics and harridans in the latter part of her career.

Gilda was a big break for Glenn Ford that propelled him to the top of the Hollywood food chain and kept him on a career trajectory that would last for decades, in genres as varied as war epics to westerns, romance, drama and family comedy. Ford would always be grateful to Rita for jump-starting his career with Gilda.


As a big fan of film noir, this is my absolute favorite, chiefly due to the searing chemistry of the two principal stars and the unsettling idea that hate can be as powerful as love. Gilda is the ultimate anti rom-com!

Big thanks to my friend Quiggy at The Midnite Drive-In for hosting the Film Noir Blogathon. I’m very excited to discover new blogs and immerse myself in this classic genre!