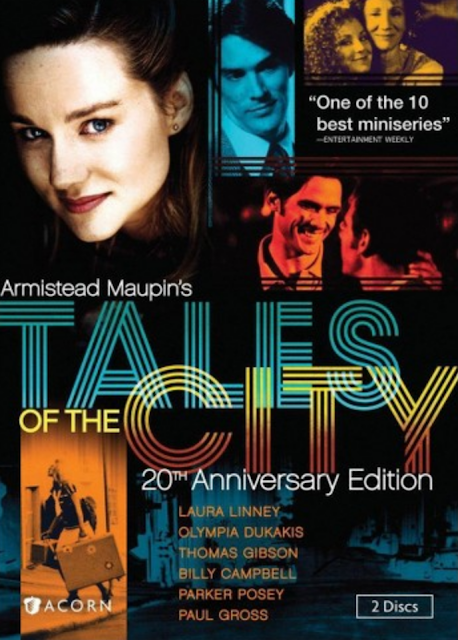 Ahh, San Francisco. Like the Land of Oz and the Garden of Eden, the fabled City by the Bay is a magical and mythical destination, a real-life come-as-you-are party, a place where you can let your hair down, be yourself and pursue your own idea of happiness—and maybe even taste some forbidden fruit along the way. No wonder Angels in America playwright Tony Kushner used the city as his prototype for Heaven.

There could be no better setting for the odyssey of Armistead Maupin’s Tales of the City (1993). Based on his marvelous series of books, originally serialized as a fictional column in The San Francisco Chronicle, this groundbreaking 1993 miniseries is set in the San Francisco of 1976, that brief shining sweet spot after Vietnam and Watergate and before the spectre of AIDS crashed the party of free sexual expression.

Dealing with themes of homosexuality, transsexualism, drugs and a variety of other perversions and persuasions, and featuring unapologetically adult language and nudity, the series caused an uproar with its first controversial airing on PBS. The ultra right-wing Moral Majority blasted the series for its “obscene” subject matter and campaigned vigorously against federal funding for the arts for public television. With all that political kafuffle, no wonder Tales remains so popular with the outcasts, sinners and heathens of the world.

Tales of the City is the best kind of soap opera, peopled with unforgettable characters that audiences grow to love and care about, fantastic stories made addictive with byzantine plot twists, metaphysical themes and synchronicities, all imbued with an underlying philosophy of love and tolerance. Gorgeously produced, intelligently written and brilliantly acted, this is a series I find myself watching again and again.

Olympia Dukakis (Moonstruck, Steel Magnolias) is iconic as the mysterious and strange landlady Anna Madrigal, “the mother of us all,” who makes each tenant in her Barbary Lane building a member of a new family unit, offering unconditional love and acceptance—as well as a welcoming joint taped to their doors, a housewarming gift from her own overgrown garden of cannabis plants.
“You’re one of us now,” she whispers to new tenant Mary Ann, urging her to “bite into that lotus,” quoting Tennyson (“Eating the lotus day by day…”). When asked if she has an objection to pets, permissive Mrs. Madrigal replies, “Dear, I have no objection to anything…”

Of course, like all denizens of Barbary Lane, Mrs. Madrigal has her secrets…chief among them (spoiler alert) that she spent the better part of her life as a man named Andy before having a sex change. (In the 1970s when the book was written, and even into the 1990s when the series was produced, this was a shocking secret to reveal…but today we take such things in stride. This mild spoiler is only one delicious plot twist in an intertwining crazy quilt of sordid but entertaining lives.) “We don’t have people like that in Cleveland,” Mary Ann comments ruefully.

Laura Linney (Ozark, The Truman Show) brings to life the character of sweet and naive Mary Ann Singleton of Cleveland, Ohio, who surveys her new hometown with wide-eyed wonder and curiosity. Through the course of the series, goody-two-shoes Mary Ann will nevertheless end up having an affair with a married man, smoking the devil's weed and singlehandedly taking down a sleazy private investigator who threatens to reveal Mrs. Madrigal’s identity as a transsexual.

Barbara Garrick (Working Girl) steals every scene she’s in with her humorously tense and agitated performance as DeeDee Halcyon Day, a neurotic and uptight heiress who moves in the same social circles as infamous fellow San Franciscan Patty Hearst.

Chloe Webb (Sid and Nancy, Practical Magic) is perfect as the kooky Mona Ramsey, a free spirit who goes around topless, practices yoga and transcendental meditation and reveals lesbian tendencies, falling for moody fashion model D’Orothea Wilson, played by Cynda Williams. Mona gets Mary Ann a job at Halcyon, where she works as an advertising copywriter.

Rounding out the cast are a host of brilliant actors: Donald Moffatt (Clear and Present Danger) is Edgar Halcyon, a wealthy but terminally ill businessman who falls in love with Mrs. Madrigal. Thomas Gibson (Eyes Wide Shut) is unforgettable as Beauchamp (pronounced Beacham) Day, Halcyon’s bisexual playboy of a son-in-law, who cheats on his wife with anybody handy. Parker Posey (Waiting for Guffman, Best in Show) is delightfully offbeat as Connie Bradshaw, Mary Ann’s classmate and friend from Ohio who introduces her to the '70s San Franciscan’s daily diet of of disco, casual sex and supermarket cruising.

As well, you’ll run across a host of quirky cameos by the likes of Edie Adams, Rod Steiger, Karen Black, Bob Mackie, Ian McKellan, a young Janeane Garafolo and many more, adding piquant flavor and spice to the mix of outlandish characters and situations.

Tales of the City transports you to a bicentennial red, white and blue mid-1970s where you can almost smell the lemon candles, incense and marijuana in the air, as you boogie to classic disco and watch Mary Tyler Moore and Mary Hartman. It’s a freewheeling era of birth control, feminism and casual pickups—cruising for sex in the aisles of a Safeway supermarket.

Naturally, the central character of the series is the hilly, romantic, mysterious gothic city referenced in the title itself. San Francisco has inspired many a storyteller—it’s a progressive sanctuary that birthed the hippie movement, the Summer of Love and the quest for LGBTQ rights, a place where they were practicing tai chi in the park 40 years before it became fashionable. 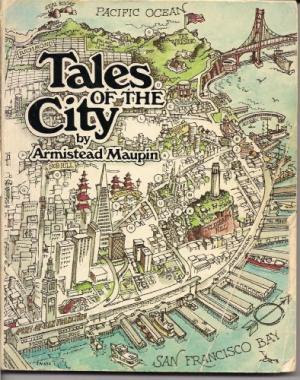 San Francisco is a very special city; “Nobody is from here,” someone comments to Mary Ann. Indeed, Armistead Maupin himself is a San Franciscan transplanted from the Deep South, and to the author the city is a very metaphysical place indeed. Mrs. Madrigal refers to her entire adopted family as reincarnated citizens of Atlantis.

Much of the series was filmed on location here, and the action centers around the ramshackle apartment house at 28 Barbary Lane—a fictional address on real-life Russian Hill, off Lombard Street, and indeed Maupin’s plots and subplots meander and twist much like the famous crooked thoroughfare itself. Homages to Alfred Hitchcock’s Vertigo abound in the series, from Bernard Herrmann’s music to locations including Kim Novak’s Mason Street apartment building, the Golden Gate Bridge, the Legion D’Honneur and Muir Redwood Forest.

Maupin’s Tales continued to unfold with the sequels More Tales of the City (1998) and Further Tales of the City (2001) produced by Showtime. The second and third series introduced a host of new characters (including Mrs. Madrigal’s zany brothel-running mom Mother Mucca) and storylines from the Maupin books, as well as new actors playing familiar characters. But fan favorites Laura Linney, Olympia Dukakis and Barbara Garrick reprised their roles in both series, establishing a strong through-line of continuity.

In 2011 a musical version was mounted at San Francisco’s American Conservatory Theatre featuring music by Jake Shears of Scissor Sisters fame. The opening night was attended by Laura Linney and Armistead Maupin (and my best pal Eric and I were there in the audience that night, too, at the Geary Street theater!).

Good news—Maupin’s Tales will continue to be told on screen. Netflix has ordered 10 new episodes (presumably based on the later Maupin books, the last of which were published in 2010 and 2014) that will again star Linney as Mary Ann, Dukakis as Mrs. Madrigal and Garrick as DeeDee. I eagerly await the series reboot in 2019.  In the meantime, for Tales virgins, the original 1993 series is currently running on Acorn TV.

Celebrating all the kinks and peccadilloes and foibles of the human experience, Tales of the City celebrates the imperfect art of being human—ultimately, it’s all about people and the love they share.

This is an entry in the Gender Bending the Rules Blogathon, cohosted by my friend Quiggy at his engaging and prolific Midnite Drive-In blog. Thanks so much to all who have participated—I look forward to reading everyone’s entries!