Two decades before Karen Black famously played a stewardess forced to fly and land a plane in Airport ’75, Doris Day played those scenes, too, almost verbatim, in an overwrought but entertaining psychological thriller called Julie (1956).

Julie is one of my favorite Day films because it’s one in which she stepped far away from her musical comedy comfort zone. Admittedly, it’s far from a great film, but it’s an entertaining yarn; Doris carries the picture with her eminently watchable portrayal of the archetypal damsel in distress.


When you think of a Doris Day movie, a heavily dramatic psychological thriller is probably not the first thing to enter your mind. More likely, you may think of nostalgic period pieces like On Moonlight Bay or By the Light of the Silvery Moon; backstage showbiz musicals like Lullaby of Broadway and Tea for Two; or the early ’60s bedroom farces that made her the #1 Box Office Champion four years running opposite hunky leading men like Rock Hudson (Pillow Talk), Cary Grant (That Touch of Mink) and James Garner (The Thrill of It All).

A gifted songstress and talented comedienne with a seemingly indelible virginal girl next door image, Day was able to sink her teeth into a choice dramatic role only a very few times in her career. Early on she had played Ginger Rogers’s clueless sister, married to a Ku Klux Klan thug in the heavily dramatic Storm Warning, and Kirk Douglas’s platonic singer friend in Young Man with a Horn, but these supporting roles called upon her to do little but play her plucky, sunny blonde self.

In Love Me or Leave Me, though, Doris showed off both her musical and acting prowess in what many believe to be her finest screen performance opposite James Cagney, and soon after she would give an equally memorable performance working with James Stewart and Alfred Hitchcock in the exciting and entertaining remake of The Man Who Knew Too Much.


In Julie, Doris plays a well-to-do young widow and former airline hostess who has just married a swarthily attractive but dark and brooding man named Lyle Benton, played by French heartthrob Louis Jourdan (The Swan, Gigi). Unfortunately, Julie’s possessive new hubby has a jealous streak and a frighteningly explosive temper. At first, Julie puts up with a tremendous heap of toxic abuse from her handsome but controlling new husband, and it’s not until she discovers that Lyle might have been responsible for her first husband’s mysterious death that she tries to escape. How the rest of the film unfolds is told by the lobby card advertisements of the time, which screamed: “Run, Julie, Run!"

Doris’s husband and business manager Martin Melcher set up a production company to produce Day’s films himself and get a piece of the action. Julie was the first film to be produced by Melcher and Day under their Arwin (as in “your loss is our win”?) Productions.

According to Day’s engrossing and frank autobiography Doris Day: Her Own Story, Julie’s theme of jealousy permeated the atmosphere both in front of and behind the cameras during the filming, as Marty Melcher became increasingly suspicious of the on- and off-screen chemistry of the film’s two stars. Though Melcher himself had cast the good-looking French actor opposite his wife in the role of Julie’s psychotic and insanely jealous husband, Melcher ironically became furious with Day and Jourdan at the hours that the two costars would spend together on the set and on location, taking long walks and chatting about life, love, spirituality and every subject under the sun.


Together, Day and Melcher had embraced the Christian Science religion, and on the Julie set he admonished her to spend more time studying her script and her Mary Baker Eddy, and not so much “gabbing with that Frenchman.” During the filming, Doris fell ill with a benign ovarian tumor (according to Day, it was the size of a grapefruit) and underwent a hysterectomy, which destroyed her hopes of having more children. (Day had one son from a previous marriage, Terry, who had been adopted by Melcher.). So most of Doris’s memories of Julie were not happy ones.

With a storyline that foreshadows the Julia Roberts thriller Sleeping with the Enemy, Julie has some tense and suspenseful moments; but much of the film is a bit silly and overheated, almost to the point of camp. Example: In the scene where her husband leaves the house, giving her a chance to escape, Julie starts packing a suitcase, becoming more and more frantic as she searches for clothes, toiletries, etc. Audiences of the day must have shouted, “Just get out of that house, Doris, he’s on his way back!”

It’s a good thing Doris plays hysterical so convincingly, because she is forced to remain in an extreme state of terror throughout the entire film—literally right from the get-go. The opening scene of the film is a hyper-dramatic set piece: Julie and Lyle leave their country club in the middle of an argument and she gets behind the wheel of their convertible to drive, raving about his appalling jealous behavior. Lyle jams his foot onto the gas, forcing poor Julie to maneuver the wheel to keep from careening off a cliff and killing them both. Later, Day’s stewardess-landing-the-plane business maintains the melodramatic momentum in the film’s climactic moments.


Jourdan is properly menacing as the husband from hell, but it is the redoubtable Doris Day who carries the film with her energetic performance, ably supported by reliable Barry Sullivan as her dead first husband’s best friend, who helps her escape Jourdan’s insanely jealous clutches.

Perhaps just to make sure she nailed all the nuances of the damsel in distress, four years later Doris would portray another memorable terrified-wife-having-nervous-breakdown, opposite Rex Harrison in Midnight Lace (another of my favorite Day performances that I will save for Part 2, to come at a later date!)

Much of Julie was filmed on location in the coastal California town of Carmel by the Sea, just south of San Francisco. Carmel was the bright spot of the Julie experience for Day, who fell in love with the picturesque coastline and would move there full-time in the early 1970s as her film and television careers came to a close. But she was only one of two very famous Carmel residents. Neighbor Clint Eastwood, who would one day become the mayor of Carmel, used the splendors of the location in his own debut directorial film, Play Misty for Me.

On April 3, 2018, living legend Doris Day celebrated her 96th birthday in Carmel. And as of this writing, that is where Miss Day still resides with a houseful of furry friends. 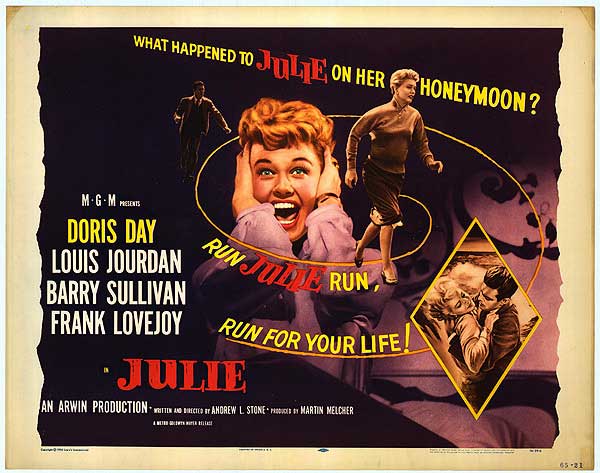