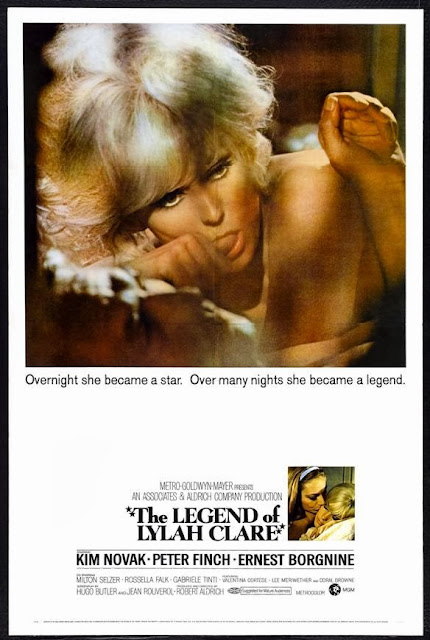 I’ve owned a bootleg VHS tape of The Legend of Lylah Clare (1968) for some years now. It was on a wish list of films I’d read about since childhood but never had the chance to see. Then a savvy friend provided me with a copy. I confess...after multiple attempts over the years, I finally got through the whole thing. It really is that unwatchable.

With the impressive pedigree of talent involved, it would seem to be a movie any avid connoisseur of camp should love, directed by the great Robert Aldrich (Whatever Happened to Baby Jane, Hush, Hush, Sweet Charlotte, The Killing of Sister George) and starring the enigmatic and glamorous film goddess Kim Novak (Vertigo)  as well as the brilliant and intense British actor Peter Finch (Network). But the movie disappoints on practically every level.

The plot is promising: The persona of a long-dead film diva is resurrected for a new biopic when her Svengali-like director and lover Lewis Zarkin (Finch) finds a woman bearing an eerie and uncanny resemblance to the deceased star. And not only does Elsa (Novak) look just like Lylah Clare, she is seemingly possessed by the dead actress’s restless spirit.

But the film just doesn’t work. It’s a total bore, despite a couple of fleeting opportunities for a flash of Aldrich’s gothic magic. The only scene in the whole film that approaches the master’s best work is the cocktail party and press conference early in the picture where Elsa Brinkmann (stage name Campbell) is introduced to the Hollywood press corps. Here, the great character actress Coral Browne (unforgettable in Auntie Mame and in Aldrich’s own Sister George) makes the most of her cameo as the embittered, disabled gossip columnist Molly Luther. Though Browne returns all-too-briefly in a couple of scenes before the end of the movie, there are two more long hours to get through.

If the movie has any other saving grace at all, it’s the radiant Miss Novak herself. Evoking the essence of legendary screen goddesses like Harlow, Monroe and Dietrich (and naturally, herself!) in diaphanous silk Renie gowns and iconic Guilaroff hairstyles, Novak really gives the part her all, and the moments when the demure Elsa channels the raucous, Teutonic, foul-mouthed Lylah are truly riveting.

But Novak and company are severely hampered by a meandering script with long, talky scenes that lead nowhere, mostly philosophical treatises on how Hollywood shapes and manipulates reality through popular culture. Attempts at wit and comic irony fall flat, despite the talents of fine actors like Ernest Borgnine as a stereotypical studio head. The ridiculous ending is worst of all, where director Zarkin rewrites Lylah’s death scene, placing her on (not kidding here) a circus trapeze, from out of nowhere. (Things that make you go, “huh?”)

Another strange aspect of this picture is the decision to cast so many female characters with heavy European accents, so thick that you can’t understand a word they’re saying. It’s hard enough to decipher Kim when she affects her throaty Dietrich-esque German accent—but we also have to struggle with the the mozzarella-heavy Italian of both Rossella Falk as Lylah’s lesbian confidante and Valentina Cortese as her ebullient costume designer. (Obviously the filmmakers were counting on European grosses to offset the losses of this turkey, but hasn’t anyone ever heard of dubbing?)

In the hands of someone like Aldrich’s brilliant screenwriting collaborator Lukas Heller (Baby Jane, Sweet Charlotte), this might have been a much more satisfying film.  Or perhaps some surgical film editing could have helped the pace of this very uneven cinematic disappointment. As it is, we are left with a few fragmented images and moments that fail to fulfill the promise of a cult classic that elevates a great star to mythic legend.  Instead, it’s on my personal list of Worst Films Ever Made...it makes Valley of the Dolls look as if it were written, produced and directed by Joseph L. Mankiewicz. 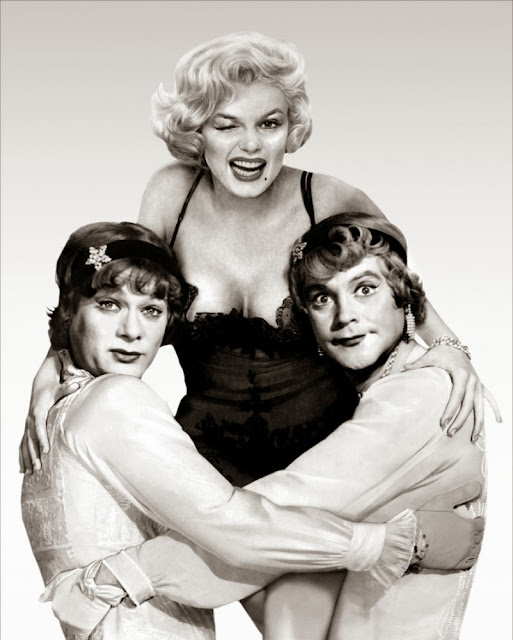 Some Like It Hot (1959) was a film Marilyn Monroe hated making, but you’d never know it. This comic gem of a picture was Monroe’s all-time top-grossing crowd pleaser, and contains one of her most memorable performances. As the dizzy Sugar Kane, Marilyn cavorts gleefully with two horsey girlfriends who turn out to be guys in Billy Wilder’s frenetically funny Jazz Age farce.


She had to be talked into doing the film in the first place. There was no completed script when Billy Wilder started placing pleading calls to Monroe, semi-retired in New York City and unenthusiastic about playing yet another not-very-bright blonde bombshell. But husband Arthur Miller persuaded her to take the part. “I think he secretly likes dumb blondes,” she joked to a friend, but the truth was that with Miller suffering from writer’s block and Marilyn also not working, the Miller household needed the income. So Marilyn relented and took the role, but was then determined to make it her own. 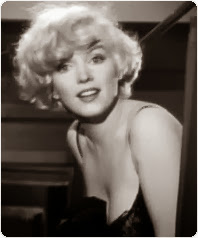 A Method actor who drove her director and costars to distraction as she struggled to “make contact with the character” and breathe life into the role of the bubble-headed ukelele player, Marilyn took her work very seriously. Determined to achieve perfection despite a near-neurotic lack of confidence, she relied heavily on her drama coach Paula Strasberg (wife of Actors Studio director Lee) for support, inspiration and guidance. This irked director Wilder, an old-school chauvinist who liked to run his movie sets as a benevolent dictator but could not control his female star. Costars Tony Curtis and Jack Lemmon suffered too, in uncomfortable drag and heavy makeup, waiting for the perpetually tardy Marilyn to show up on the set. Yet together, the creative team succeeded in creating a movie classic. 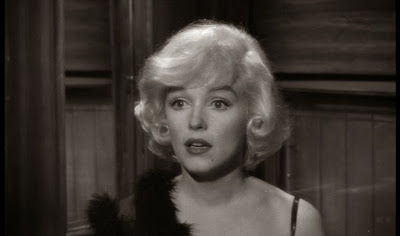 Looking at the film today, it’s Marilyn who shines brightest of all. Her souffle-light characterization has unexpected depth and dimension: Sugar is an alcoholic who has always been unlucky in love; a giggling girl who always looks on the bright side but ends up “with the fuzzy end of the lollipop;” a seductive satin doll spouting rapid-fire quips and wisecracks at director Billy Wilder’s preferred lightning speed. What could have been a flat, one-dimensional character becomes the sparkling apex of the film, elevating a potentially hackneyed cross-dressing farce to a new level of wit and adding some much-needed heart—and that indescribable Monroe magic. 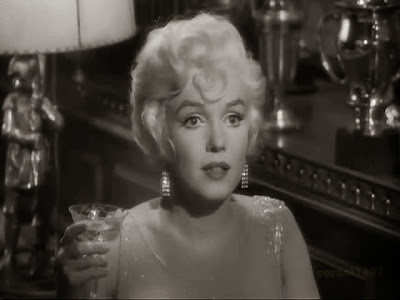 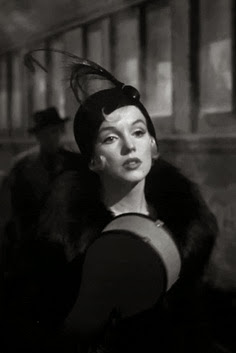 I don’t think Marilyn could have crafted this role with nearly as much tragicomic nuance without the training the Actors Studio gave her...true, dumb blondes had been her stock in trade for a decade, but with each successive part she played, Marilyn added layers of eccentric detail that brought each character into more vivid focus.  For her performance in Some Like It Hot, Marilyn Monroe won the Best Actress in a Comedy Golden Globe Award. 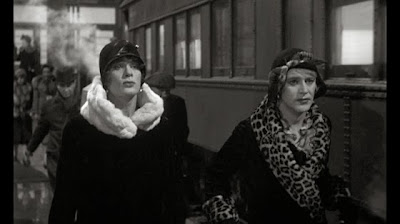 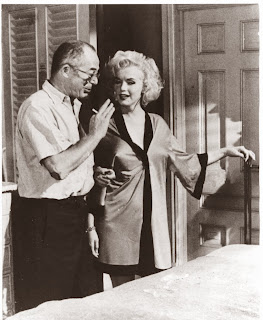 True, Marilyn did not endear herself to the cast and crew of Some Like It Hot, but they paid her back with plenty of well-publicized vitriol themselves, accusing her of unprofessional behavior verging on madness—refusing to learn her lines, ruining take after take, showing up hours late. Wilder, Curtis and even the ordinarily menschy Jack Lemmon publicly questioned not only her discipline and professionalism but her talent as well, dismissing her gifts and contributions to the film. Tony Curtis went so far as to say kissing Marilyn had been akin to “kissing Hitler.” (Even years after Monroe’s death, they continued to repeat the same unkind remarks about their most famous costar.)

The public criticism devastated Marilyn, and husband Miller gallantly defended her. But ever since becoming a star, Marilyn had been the target of vicious attacks on her talent, her character and her unconventional approach to life. She was a free spirit and a feminist long before the women’s movement, and she always marched to the beat of her own inner drum. It’s interesting that some of the harshest criticisms leveled at her came from the men she worked with--directors, producers and studio heads. Men of the 1950s were obviously threatened by a woman with as much potential power and influence as a Marilyn Monroe. So they brushed off  her contributions by labeling her as difficult, impossible, or just plain crazy. 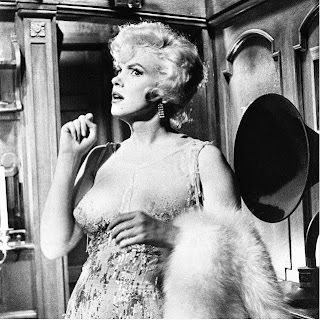 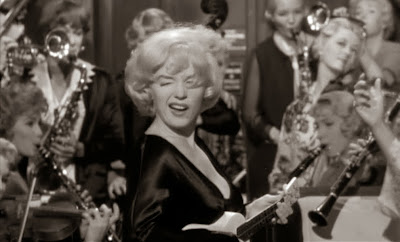 Seeing the finished product up on the screen, the viewer must ask how much of all of that fabled Some Like It Hot stürm and drang is true and accurate, and how much is trumped-up publicity or mere sour grapes? Perhaps it doesn’t really matter, except to appreciators of the sensitive artist known as Marilyn Monroe. Some Like It Hot is great film, a comedy classic, and Marilyn is an integral part of that film’s timeless appeal.