Have you seen the one where Mary Tyler Moore plays a nun opposite Elvis Presley as a doctor? More of a curiosity than a movie classic, Change of Habit (1969) has some surprisingly entertaining moments, and marked a turning point for both its iconic stars.

By the time he made Change of Habit, Elvis Presley had starred in 30 films, the lion’s share of them puerile, formulaic vehicles designed to exploit his manufactured rock star image for commercial gain. Ironically, his film career had basically killed his record sales, as most of the music in Elvis’s films was studio-manufactured pablum that he could barely stand performing. (To me, Elvis on screen is like the male Doris Day...trapped by a stereotypical image and one-dimensional, cookie-cutter film roles, his talent and versatility rarely fully realized.)


At the beginning of his film career, Elvis had longed to be taken seriously as an actor. Indeed, in his 1956 movie debut in the sentimental western Love Me Tender, he had been compared to James Dean. Strong performances in the early films including Loving You, Jailhouse Rock and the Clifford Odets drama Wild in the Country gave way to a decade of mindless Technicolor fluff. Though there were some momentary flashes of fun and brilliance in films like Blue Hawaii and Viva Las Vegas, Presley’s dramatic promise was never fulfilled.

By the late ’60s, Elvis was disenchanted with both his film contract at MGM and his music, both controlled by his longtime manager Colonel Tom Parker, and he had already begun to put his foot down and change the trajectory of his own career. Most recently, Elvis had taken hold of the artistic reins of a Christmas TV special he had been signed to do, and transformed it from a traditional holiday concert into his groundbreaking rock ‘n roll comeback special, performing before a live audience for the first time in years.


Change of Habit would offer a similar change of pace for Elvis’s movie image, though it’s still undoubtedly a star vehicle. For a light, G-rated comedy, the movie would touch on some sensitive and timely subject matter including poverty, heroin addiction, autism and rape, with some fairly frank dialogue and situations as well (a young girl is described as a “bitch,” and the well-dressed nuns out of their habits are mistaken for high-priced hookers.)

Elvis plays Dr. John Carpenter, an inner city doctor at a free clinic in a rough neighborhood who welcomes the help of three young nurses, who unbeknownst to him, are Catholic nuns. Of course, Elvis’s doctor also strums a guitar and sings, and our first glimpse of him is surrounded by young people grooving to his edgy rendition of “Rubberneckin.’” (Though he had to continue in a musical vein to bolster the film’s commercial viability, Elvis made sure that at least a couple of songs in the film were hip and up to date.)


In his last film role, Presley acquits himself nicely, bringing heart and charm to his role of inner city physician, displaying a real chemistry with his female costar as well as with the neighborhood kids he treats at the clinic. The Elvis charisma and iconography are still apparent, though, and the Christ-like symbolism surrounding him is hard to miss as the aptly named “Carpenter” is photographed under a stained glass window (and a bright Hollywood halo around him!) while performing a rousing rendition of “Let Us Pray” to a packed church crowd during the rock ‘n roll mass finale.

As he now turned to rekindling his passion for live performance, Elvis would never act again, although he appeared as himself in two MGM-released documentary concert films, Elvis: That’s the Way It Is and Elvis on Tour, and seriously considered but ultimately turned down producer Barbra Streisand’s offer to play the fading, drug-addicted rock star in the 1976 remake of A Star Is Born (a role perhaps too close to home).

Change of Habit also marked a transition period for Mary Tyler Moore. After years as America’s TV sweetheart playing the adorable Laura Petrie on The Dick Van Dyke Show, Moore was having trouble finding a new niche. After the cancellation of Dick Van Dyke, Mary had experienced her first resounding flop on Broadway in an ill-fated musical adaptation of Breakfast at Tiffany’s opposite TV’s Dr. Kildare himself, Richard Chamberlain, and played a supporting role in the movie musical Thoroughly Modern Millie starring Julie Andrews. Change of Habit would be Moore’s last theatrical film for many years, just before finding her sweet spot back in the world of television.

Mary Tyler Moore revealed she was not exactly thrilled at the prospect of being the female lead in an Elvis movie, but her costar’s unfailing politeness, humility and work ethic helped make it a positive experience. She found Presley easy to work with, charming, sensitive and considerate, and admitted she had underestimated his acting ability.


As Sister Michelle, who has a crisis of faith when she falls in love with the charismatic Dr. John Carpenter, Mary gives a solid performance, and she’s photographed beautifully. But it would be in her next big screen movie 11 years later in which she would enjoy her greatest cinema triumph, for the role that would earn her an Academy Award nomination in Robert Redford’s Ordinary People.

Though Change of Habit is made enjoyable largely by the chemistry and star power of Elvis and Mary Tyler Moore, the leads are ably supported by a likeable and talented cast including stunning actress/singer Barbara McNair (who unfortunately doesn’t get to sing a note here) and Jane Elliot (someday to become a long-running soap opera villainness) as Sister Michelle’s cohorts. Ed Asner (soon to team up with you-know-who in a new sitcom) is perfect in his small role as a wise and kind police officer.

Between Change of Habit and Ordinary People, of course, Mary Tyler Moore would turn the world on with her smile and the brilliantly written and acted ensemble TV series that bore her name. But remember, she turned Elvis on first, and was his final—and a quite formidable—costar. 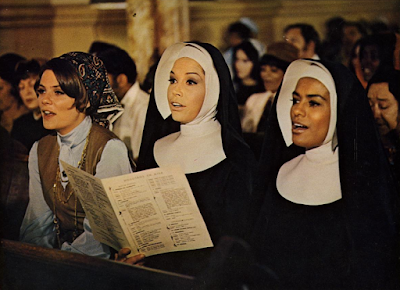