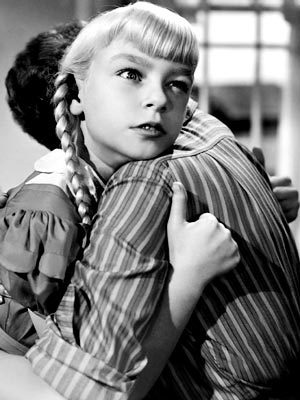 A faithful adaptation of Maxwell Anderson’s stage hit, The Bad Seed (1956) is an entertainingly melodramatic 1950s psychological thriller. A classic example of the well-made play, with a plot that unfolds strategically, then moves briskly forward toward a climactic revelation, this film  explores a theory that was just gaining ground in the 1950s—the idea that a person could be genetically predisposed to commit murder.

Despite her perfect manners, pretty clothes and “enchanting smile,” nobody seems to like little Rhoda Penmark—not her teacher, her classmates, or even her mother. (OK, her father adores her, but he’s away most of the time. And the childless—lesbian?–landlady also takes a shine to “the little princess.” But everyone who really knows her is totally hip to Rhoda’s foul stench.) When one of the girl’s classmates is drowned at a school picnic, the tragic event is deemed an accident, but everyone has the same sneaking (but unspoken) suspicion: That little rodent Rhoda is to blame.

It’s fun to watch this disparate group of 1950s actors work together. You’ll either love or hate Nancy Kelly’s mannered performance as the beleaguered mother of the pint-sized murderess—Kelly’s querulous voice, hypnotic delivery and odd gesticulations disintegrate the scenery. But you’ll also witness method acting at its very best, with the brilliant Eileen Heckart offering a tragicomic, multilayered portrayal of a grieving, liquor-sedated mother whose only child has been drowned by the relentlessly sociopathic Rhoda. Oversized character actress Evelyn Varden strikes just the right note as the good-natured but meddling landlady, and versatile veteran Henry Jones goes over the top in his portrayal of the obviously developmentally disabled janitor Leroy. Handsome William Hopper (son of Hedda) plays Rhoda’s oblivious father with the wooden amiability of a cigar store indian. 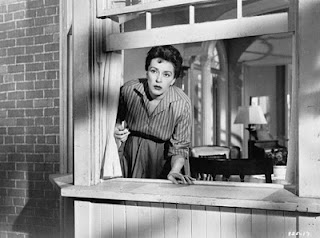 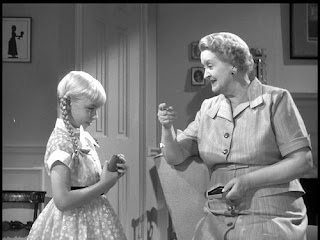 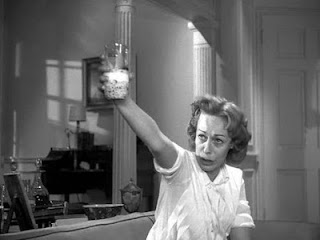 In the title role, Patricia McCormack, repeating her stage success, perfectly captures the two-faced monster that is Rhoda Penmark. When nobody’s looking, Rhoda’s singsong child’s voice hardens and drops an octave, and her sweet expression takes on a demonic, rat-faced hideousness. Truly scary. 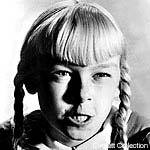 As a nod to its beginnings on the stage, this black-and-white film features curtain calls at the end instead of closing credits, and the best part is when little Patty McCormick finally receives what audience members have been longing to give her since the very beginning—a good, hard spanking.