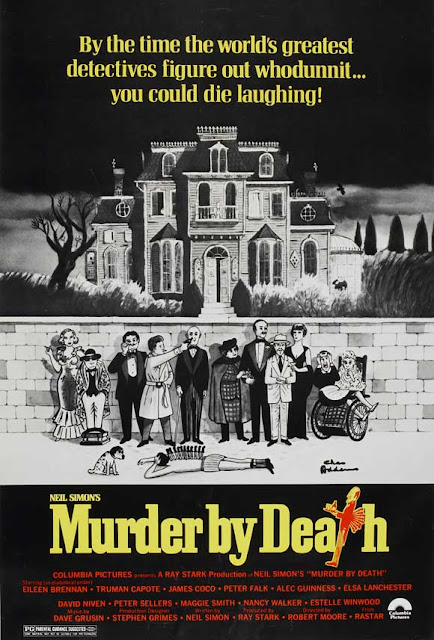 If I ever die laughing, I could well be watching a Neil Simon play or film.

Simon is the undisputed king of the deceptively simple one-line zinger...he understands how to set up and pay off a joke so quickly and cleverly that audiences never even see it coming—instead, they dissolve into delightedly surprised laughter. For within every Neil Simon witticism is the human truth that makes it funny. In his plays and films, Simon creates a context in which the most mundane and banal situations are pregnant with humorous possibility.

Unlike his warmhearted romantic comedies about ordinary New Yorkers like Barefoot in the Park, Come Blow Your Horn and The Goodbye Girl, Murder By Death (1976) is a breezy lark with no basis in reality, in which he takes beloved literary stereotypes and imbues them with his earthy humor. The plot is pure mystery movie cliché—a wealthy eccentric invites a group of the world’s greatest detectives to solve a murder that has yet to be committed. The result is nonstop fun.

In this über-clever mystery satire, Simon and a stellar cast bring human failings and foibles to the stock storybook characters that mystery readers know as well as they know themselves—and then Simon performs his magic trick of mining the comedy gold via rapid-fire, rapier-witted dialogue. To breathe life into the story, Simon and director Robert Moore assembled a  talented ensemble of actors, almost all of whom were also stage veterans, adept at fashioning a character and blessed with lightning-accurate timing and feel for pace, rhythm and style. Watching these disparate group of actors working together is a joy to behold.

Imagine Sir Alec Guinness as a blind butler saddled with Nancy Walker as a deaf mute cook. Maggie Smith and David Niven as elegant Dick and Dora Charleston, complete with an Asta-lookalike dog.  Peter Falk as the Bogie-inspired Sam Diamond. Elsa Lanchester and James Coco essaying the Agatha Christie-esque characters of British Jessica Marbles and Belgian Milo Perrier. And as the inscrutable Chinese gumshoe Sidney Wang, notorious scene stealer Peter Sellers, so uniquely gifted that he threatens to walk off with the entire film every time he opens his mouth to spout Simon’s fortune-cookie aphorisms. (In spite of his dazzling performance, Sellers reportedly hated making this film, and wrongly predicted it would be a huge flop.) 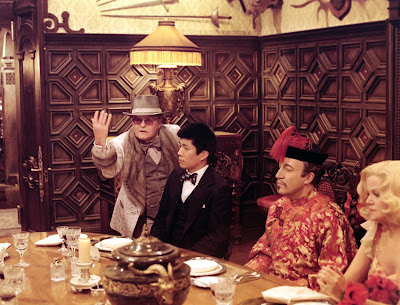 Flamboyant Truman Capote, who looks as if he just wandered onto the set from The Merv Griffin Show, was savaged by critics for his performance, unfairly, in my opinion—Capote was forever being (homophobically) excoriated for something, for just being his outrageous self. Here, he strikes the perfect note in his cameo role of Lionel Twain (the name itself a Simon joke, whenever spoken by Sellers’s Sidney Wang). Thank the pop culture gods we have this celluloid remembrance of the famed author and raconteur captured on film.


With their period costumes and stylized portrayals, films like this can really turn off audiences—compare the soufflé light Murder By Death to the execrable and leaden Clue a few years later...or even Simon’s own failure The Cheap Detective. There is, after all, a not-so-subtle distinction between a satire and a spoof. 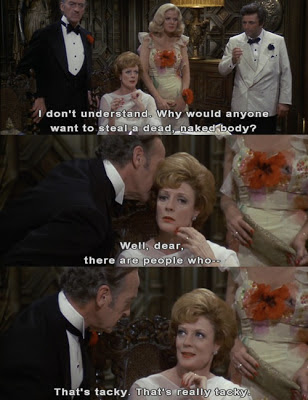 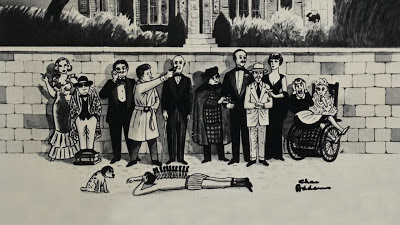