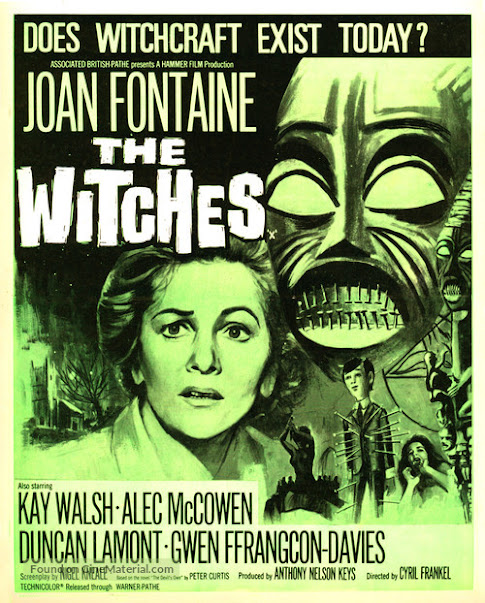 I love when actresses past a certain age are able to transition from leading ladies into character roles—that is truly a test of talent, tenacity and charisma. Some of the films they do may not be classics, but that makes it even more fun. They usually work even harder to entertain us than in their film heydays.

Joan Fontaine’s last big screen role was in a picture that she produced with Hammer Films, and she and the film are eminently watchable, even if it goes totally off the rails near the end. (There are spoilers ahead, because the train wreck of an ending is my favorite part!)

The Witches (1966) marked Fontaine’s descent into the Grand Guignol, that entertaining 1960s phenomenon of mature leading ladies seeking renewed box office appeal in the horror film genre. Pioneered by Bette Davis and Joan Crawford in Whatever Happened To Baby Jane, the genre is populated by luminaries and legends including Tallulah Bankhead (Die! Die! My Darling), Debbie Reynolds and Shelley Winters (What’s The Matter With Helen), Ruth Gordon (Whatever Happened to Aunt Alice) and Elizabeth Taylor (Night Watch). Fontaine’s own sister Olivia deHavilland joined the mature scream queen coven as well with Hush Hush, Sweet Charlotte, Lady in a Cage and later The Swarm.

(Fontaine’s feud with sister deHavilland is as well known as her iconic performances in films like The Women, Hitchcock's Rebecca and Suspicion, for which Fontaine won the Best Actress Oscar five years before her sister finally copped the gold statuette. It’s rumored they didn’t speak for more than 20 years before Fontaine’s death at the age of 96 in 2013. DeHavilland passed away at the age of 104 in 2020.)

In The Witches (released in the U.S. at the time as The Devil’s Own), Fontaine plays schoolteacher Gwen Mayfield, who has been hospitalized with a nervous breakdown following a traumatic event overseas, an indigenous uprising against the Christian missionaries, culminating in a terrifying voodoo ritual.

To her relief and delight, upon her discharge from the sanitarium Miss Mayfield is offered a dream job, as headmistress in a country day school in the picturesque village of Hedaby, where she'll be installed in a cozy little cottage replete with English rose garden and her own young housekeeper.

The movie offers a great opportunity to showcase the talents of trained British actors developing those quirky characters that make Hammer horror films such a treat. You can see the familiar tropes a mile away—the butcher who practices his knife skills with a little too much relish, for example—but this company of actors is totally committed and believable in their roles.

A standout in the cast is Hammer Film favorite Gwen Ffrangcon-Davies (The Devil Rides Out) as the fey and deliciously vague Granny Rigg, who uses her cat as a familiar to stalk Miss Mayfield. Alec McCowen (Never Say Never Again) is just right as Alan Bax, the wealthy landowner who wears a priest’s collar though he’s not in the clergy. Kay Walsh (In Which We Serve) is veddy veddy proper as Alan’s older sister Stephanie Bax, a celebrated writer and intellectual who looks down her nose at the common folk she presides over as a member of the landed gentry.

There are new young faces to be found here, too, including Martin Stephens (The Innocents, Village of the Damned) and Ingrid Boulting (The Last Tycoon) as a young teen couple who may be about to lose their virginity, to the town’s great distress.

Truth be told, the storytelling is quite compelling as the plot unfolds and Miss Mayfield begins to suspect that’s something’s amiss. (You guessed it—they’re all witches.) There is an elegant building of suspense and revelation that culminates in a climax that—well, at least breaks the tension. (And for many viewers, sort of ruins the whole film.)

And here’s the spoiler section: The producers were obviously flummoxed about how to portray a scene of supreme evil and obscenity—a wild bacchanal followed by a human sacrifice – and get it past the 1966 censors while still receiving a code of approval from the Motion Picture boards and associations in the U.S. and U.K. 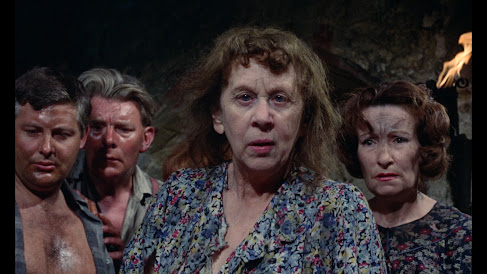 Outrageously adorned with deer antlers studded with candles (half headdress, half chandelier),  Walsh puts on quite a show and goes straight over the top, gravely intoning some Pig Latin mumbo jumbo and waving her arms in staccato fashion, as the grubby, now zombified congregation does a herky-jerky dance to her tune. It’s absurd and laughable, but if you’re like me, you can’t stop watching. 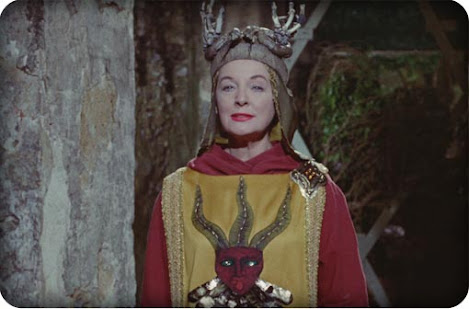 Through it all, though, Miss Joan Fontaine never loses her dignity, displaying ladylike heroism that results in an abrupt happy ending. As well, she’s photographed superbly—there’s nothing remotely 'hagsplotation' about her beleaguered Miss Mayfield, usually appearing beautifully coiffed and dressed in timeless tweed and chic sweater sets despite all the satanic fuss. (It’s always a plus to be a producer!)

Though this was her final bow as a big screen actress, Fontaine did continue working intermittently in television, appearing memorably in the ABC miniseries The Users (based on Joyce Haber’s racy Hollywood roman a clef novel) and in an episode of The Love Boat in 1977.

Today, a bevy of former A-List actresses continue the Guignol tradition via producers such as Blumhouse, lending their names to shockers and thrillers of varying quality, usually for streaming services like Netflix and Amazon Prime. I just recently saw Barbara Hershey (The Entity) as a feisty nursing home resident battling ghosts and demons; and Paula Prentiss (The Stepford Wives) as a wheelchair-bound dementia patient haunting and taunting her at-home caregiver. (Sorry, I already can't remember the titles of those two epics...and won't be writing about them. But I’m thrilled that these talented ladies are still working!)

Thanks so much to the wonderful Gill of Realweegiemidget Reviews and Barry of Cinematic Catharsis for hosting this amazing blogathon and getting us all in the Halloween mood. Look forward to reading everyone’s posts.