The Buzz About Fuzz 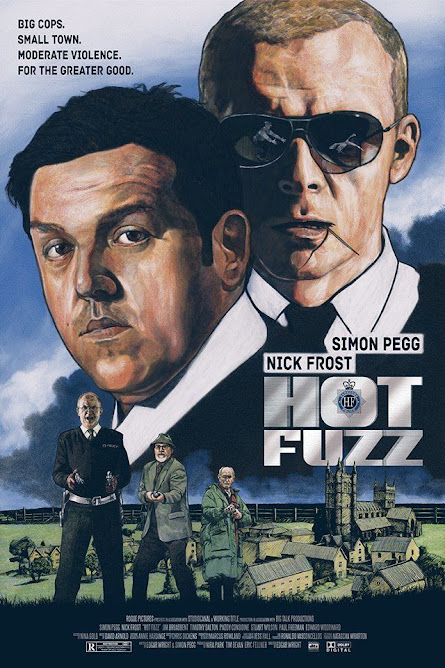 As director Edgar Wright’s follow-up to his dead-on horror satire Shaun of the Dead, Hot Fuzz (2007) is an even better, funnier and more richly multilayered movie, weaving multiple genres and homages to previous classics into one complex, rollicking, fast-paced and always entertaining film.

Our hero is the uptight, by-the-book Police Sargent Nicholas Angel—perfectly portrayed by an adorably serious and dorky Simon Pegg— a perfectionistic and therefore wildly unpopular member of the London police force who makes everyone else look bad with his obsessive exceptionalism. In the guise of a “promotion,” Angel is transferred out of London and basically put out to pasture, relegated to the tiny English country village of Sandford in Gloucestershire.

Quaint and picturesque Sandford is a perennial Village of the Year with a zero-crime rate and a lackadaisical police service (don’t call it a police force). Sandford’s Most Wanted is a runaway swan loose from the zoo, and the Neighborhood Watch Committee frets about kids in hoodies, living statues and crusty jugglers in the town square that might sully the town’s sterling reputation.

But Nicholas Angel senses a darker reality. At first in overzealous hot pursuit of shoplifters, surly townies and the aforementioned runaway swan, he realizes that a rash of bloody accidents and gory mishaps (all fatal) are in fact deliberate hit jobs.

A police officer who has never fired his gun,  Angel must embrace his dark side to fight evil—and is encouraged to indulge his secret predilection for firearms. With the help of his partner, Danny Butterman, son of the police chief (unforgettably played by Nick Frost), Angel sets out on an investigation that culminates in a town-wide explosion of vigilante justice.

Inspired by Danny’s favorite movies Point Break and Bad Boys II, the last quarter of the film shifts gears from buddy comedy to a kick-ass shoot ’em up, a fitting tribute to  “every action movie ever made,” with further nods to classic conspiracy thrillers like The Wicker Man.

Juxtaposing zany physical comedy with often gory scenes of violence and rapier-sharp wit, and peopled with a marvelous cast at the top of their game, Hot Fuzz is a no-holds-barred, adrenalin-filled thrill ride, further fueled by a rousing soundtrack of ’80s and ’90s pop music.

The chemistry of Simon Pegg and Nick Frost is the glue that holds the film together as the pair warmly salutes and satirizes the buddy comedy genre. They’re a classic comic team in the style of Laurel & Hardy, Abbott and Costello, and Martin & Lewis, with Pegg as straight man and Frost as clown. (The pair would go on to make more films together, but none have matched the critical or financial success of Shaun or Fuzz.)

The film is packed with well-known actors, a virtual who’s who in English filmdom—and no one does dry humor better than the Brits! From cake-eating Police Chief Frank Butterman, who makes sure criminals get their just desserts, played to the hilt by Jim Broadbent (Moulin Rouge), to the legendary, always menacing Billie Whitelaw (The Omen, Night Watch) as Joyce Cooper, proprietress of the Swan Hotel, to Wicker Man antihero himself Edward Woodward, the cast is uniformly stellar. There are also small cameos by Bill Nighy and Martin Freeman as well as unbilled bits from Cate Blanchett and Steve Coogan.

Timothy Dalton, who started his career as an 80-year-old Mae West’s handsome young bridegroom in Sextette, is a standout as urbane supermarché owner Simon Skinner, who plays a clever cat-and-mouse game with Angel. (Dalton’s short-lived tenure as James Bond in the late 1980s might have benefited from some of the Welsh actor’s comedic adeptness and droll delivery. But after the feather-light performances of the previous Bond, Roger Moore, the producers wanted the series to take a darker turn. Both Dalton's films underperformed, though, and Pierce Brosnan restored Bond's light comedic touch in his interpretation of 007.)

Future Oscar winner Olivia Colman (The Favourite, The Crown) makes the most of her small role as a member of the Sandford Police Force amused by the “accidents” that plague the small town. (When a drunken townsman presumably sets his house on fire during a late-night “fry-up”, she quips: “Who doesn’t love a midnight gobble?”)

With a script cowritten by actor Pegg and director Wright and skillfully creatively executed by film editor Chris Dickens and cinematographer Jess Hall, Hot Fuzz is rich, masterfully fast-paced storytelling for movie lovers, one of those films you have to see again and again to capture every nuance, reference and comic aside. 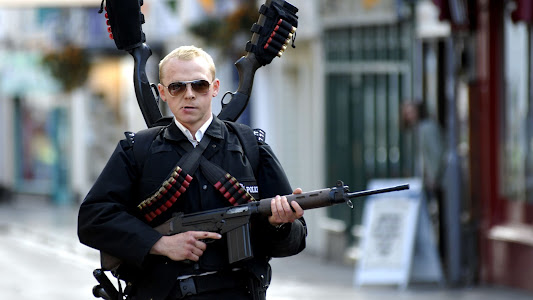 Thanks to Gabriela from Pale Writer and Gill from Realweegiemidget Reviews for hosting this amazing Not Bond Blogathon which will undoubtedly leave us all a bit shaken but not stirred. Look forward to reading all the posts!