The Desperate Housewives of Stepford

Ira Levin’s iconic masterpiece of suburban paranoia plays out what may be every red-blooded American male’s fantasy...a beautiful and selfless helpmate who willingly fulfills his every need and desire, asking for nothing in return...the perfect wife and mother, who lives only to serve her lord and master. It’s the ultimate ego trip for the wounded male psyche, the man who feels he is losing his grip on the world in the face of a more progressive and egalitarian society.

To Levin, master teller of tales of conspiracy including Rosemary’s Baby and The Boys from Brazil, evil is cool and clinical and expedient, a series of very matter-of-fact decisions devoid of compassion or love---selfishness, after all, is the source of all maleficence. The film adaptation of his novel The Stepford Wives (1975) is no exception. 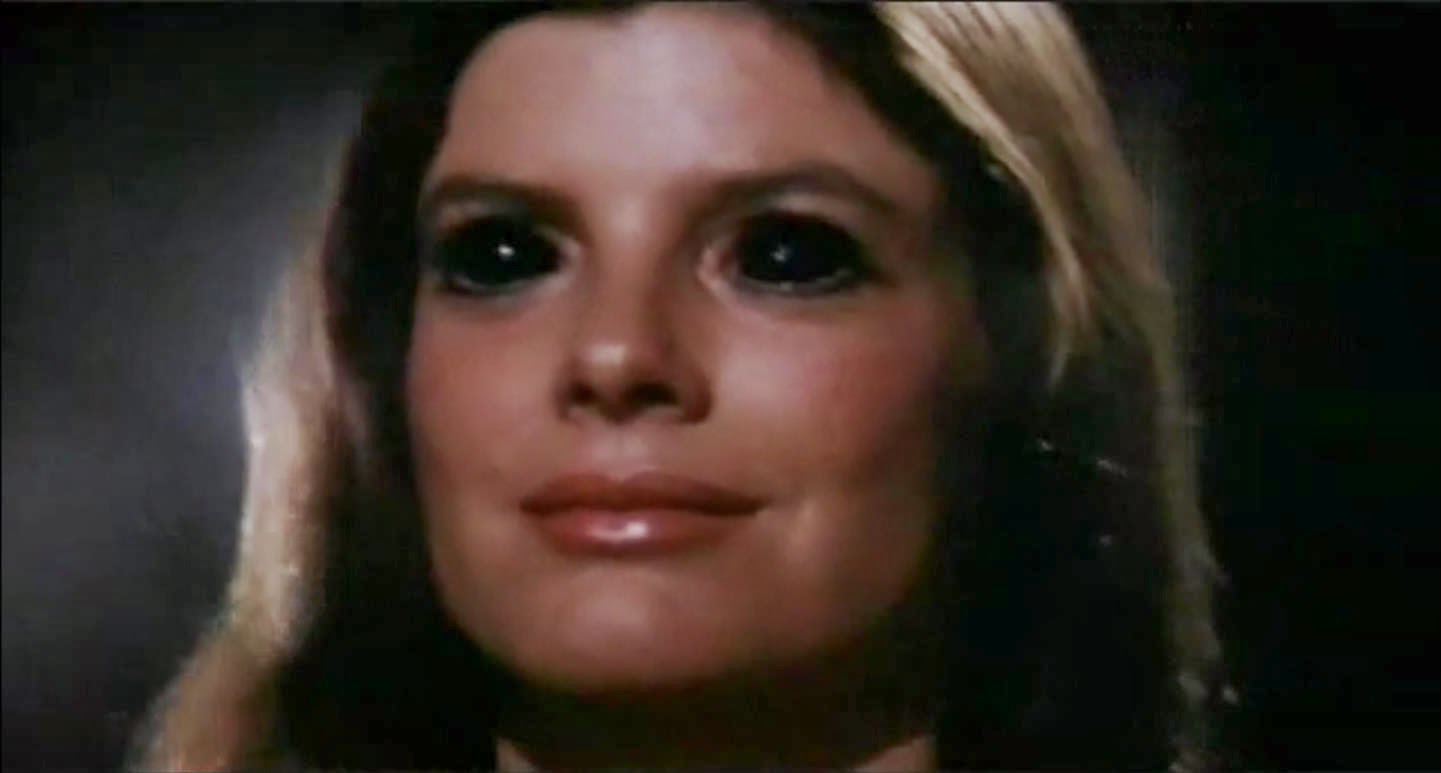 By the mid-1970s, the burgeoning feminist movement was reaching a fever pitch, with activists like the alternately hated, feared and glamorized Gloria Steinem and plain-spoken congresswoman Bella Abzug leading the revolution for female equality. Steinem’s Ms. Magazine had given young women an alternative to the traditional titles Mrs. or Miss, and legislation in the form of the polarizing Equal Rights Amendment was on the horizon. And of course, in the face of such progress, the feminist backlash was now in full swing.

The film version of The Stepford Wives lacks the detailed, operatic building of suspense of Roman Polanski’s Rosemary’s Baby, but receives an effective if workmanlike treatment by British director Bryan Forbes. Forbes prefers to focus upon the sleepy town of Stepford’s mundane everyday ordinariness; his pacing is slow and deliberate, but allows the terror to sneak up and strike with satisfying shock and awe by film’s end.

Screenwriter William Goldman captures the zeitgeist of the era and puts the story in context with brief nods to some of the current concerns of the day, including pollution and the civil rights movement. When Joanna and Bobbi begin to delve into reasons why the ladies of Stepford are addicted to cleaning and scrubbing and cooking, their search leads them to believe there may be something in the water...an environmental hazard that is causing the women’s strange behavior. Later in the film, with a bow to racial diversity, the newest residents of Stepford, an African-American couple, are seen bickering in the supermarket. (And the sloppily dressed wife will presumably soon be forced to clean up her act as well.) In Stepford, evil is an equal opportunity proposition.


For Katharine Ross (The Graduate, Butch Cassidy and the Sundance Kid), one of the most beautiful actresses of the late ‘60s and early ‘70s, Joanna Eberhart is a career-defining role.
Joanna, an aspiring photographer, has put aside her ambitions and need for her own identity in favor of being a wife and mother, agreeing to move from her beloved New York City to antiseptic, conservative Stepford. But her talent and drive refuse to let her give up on her dream of being remembered, and she finally begins to stand up for herself (albeit too late). Utterly feminine and undeniably gorgeous, Ross nevertheless exudes a steely strength in her intelligent portrayal of Joanna. (Today, the talented actress is regrettably semi-retired, and makes only rare film appearances, most notably her effective cameo role as the therapist in Donnie Darko.)

Forbes excels in contrasting the ordinary with the horrific, suspending disbelief and at the same time enhancing the shock value. The scenes of marital disharmony between Joanna and her husband (well played by Peter Masterson) are realistic, as Joanna is alternately coddled, lied to, ignored and disrespected in favor of her husband’s needs.  “When,” he asks Joanna rhetorically when she complains about her neighbors’ penchant for cleanliness, “are things going to start sparkling around here?”

Talented Tina Louise makes the most of her few scenes as the smart and cynical trophy wife Charmaine; Louise’s typecasting as Ginger Grant on Gilligan’s Island had practically brought the actress’s promising career to a halt until this role came along. Louise gives Charmaine just the right edge in her portrayal of the maturing, throaty-voiced beauty.


Nanette Newman, wife of the film’s director, is properly robotic as Joanna’s picture-perfect next-door neighbor Carol Van Sant, with her wide-eyed blank stare and whispery singsong delivery: “I’ll just die if I don’t get this recipe.”


The down-to-earth Paula Prentiss brings a refreshing current of dark humor to the proceedings as slobby newcomer Bobbie Marco(witz), who joins Joanna in her distaste for the mindless “pan-scrubbers” of Stepford.


The women’s transformations from living, breathing beings to subservient and perfectly proportioned automatons are chilling, thanks to the amazing performances of the principals, particularly Ross, Prentiss and Louise, who are all insidiously replaced right before our very eyes.

Yes, there is fertile ground here in Stepford for camp, as well, but it is used judiciously to leaven the proceedings, and has helped secure this film’s iconic status. The “consciousness raising” women’s group scene, featuring all the wives trading cleaning tips, is priceless, as is the supermarket finale played under the Muzak of the Mighty Wurlitzer.

Just as Rosemary’s hubby Guy Woodhouse is matter-of-fact about selling his wife’s womb in return for material success, so the members of the Stepford Men’s Association have close to zero guilt when it comes to making their lives a little easier by disposing of their pesky wives and replacing them with the equivalent of electronic blow-up dolls. (Though Franklin Cover--TV’s Tom Willis of The Jeffersons-- is shaken enough to pull over by the side of the road after wife  Charmaine’s “change”--but he recovers quickly enough to dig up his wife’s beloved tennis court to put in a swimming pool.) 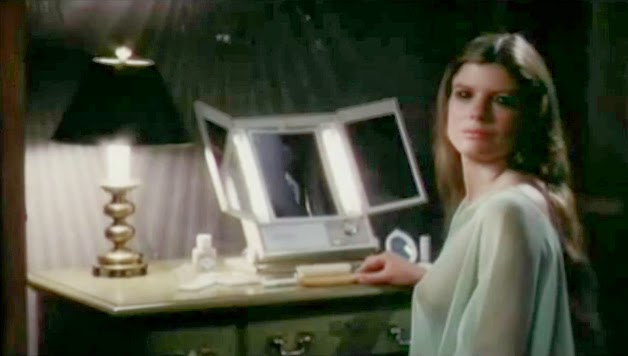 Patrick O’Neal is appropriately sinister as the diabolical Dale “Dis” Coba, who learned the tricks of the android trade at a stint in Disneyland. The not-so-subtle “upgrades” that Dis installs in his fembot creatures, including the large firm breasts inspired by the old Varga girl drawings from gentlemen’s magazines, foreshadows the plastic surgery craze of today, smooth faces and silicone breast implants wiping away any trace of individuality or character. But today, the women themselves elect these surgeries. There’s no need for coercion, or murder.

The climax of the film is truly terrifying, as Dis unveils his murderous doppleganger of Joanna to the hysterical victim. Katharine Ross’s plaintive, whimpering wails of horror when she learns her fate are unforgettably disturbing.

The unfunny spoof that masqueraded as a remake in 2004 doesn’t warrant a mention here; but the campy 1990s TV movie-of-the-week The Stepford Husbands with Michael Ontkean and Donna Mills at least gave the Stepford women the opportunity for the tables to be turned and to enjoy the services of their own custom-made, ever-ready Energizer stud muffins.

One of my favorite essays on this cult classic can be found over at Ken Anderson’s sensational Le Cinema Dreams blog.