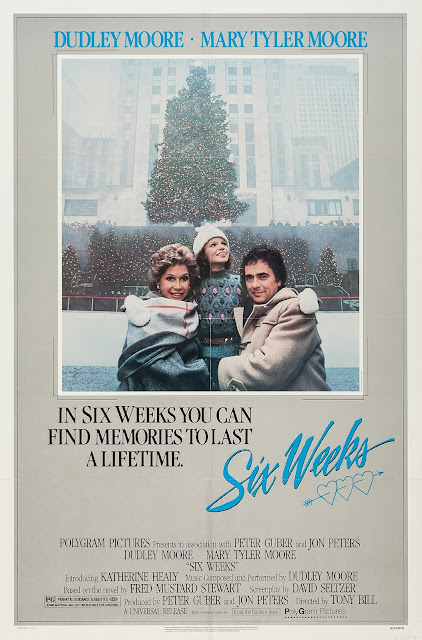 ’Tis the season to be bright and merry and joyful—or to fake it till you make it. That’s how many feel about the hustle and bustle and forced frivolity of this particular time of year. For the gimlet-eyed film lover who may be feeling just a wee bit of anti-holiday sentiment, I recommend the following antidote to those inane Lifetime holiday romances and even the stalwart classic It’s a Wonderful Life. Here's a holiday movie that was excoriated by critics and flopped at the box office, likely due to its relentlessly downbeat subject matter. Have you ever seen the one about the last wish of a dying girl with just a very short time to live (see movie title for exact prognosis)? This is Six Weeks (1982).

Surprisingly, it’s far from a total disaster. Directed with sensitivity by Tony Bill (My Bodyguard), the handsome actor who squired Goldie Hawn to that wild party in Shampoo and won an Oscar for coproducing The Sting, this film has grown on me over the years. Its heart is in the right place, and time has been kind to it.

True, Six Weeks is a curiosity in many ways. A film starring Moore and Moore—no relation, of course, but the pre-film publicity made much of it. Mary and Dudley. Two comic geniuses playing against type in a tragic melodrama—released on December 16, 1982, just in time for a good Christmas cry.


Mary Tyler Moore is cosmetics tycoon and doting mother Charlotte Dreyfus, who is determined to give her ailing daughter a life of purpose and meaning, no matter what it costs.

Channeling the brittle, edgy and high-strung vibe she had recently perfected in Ordinary People (earning her a well-deserved Best Actress Oscar nod), Mary is a little bit scary here. The high humor of her salad days in the sitcom universe has all but evaporated, and we are left with a chic, glamorous but very serious and unhappy woman. But we understand why.

MTM’s onscreen persona changed dramatically as she matured—there are three distinct phases: Sweet and emotional Kennedy era wife Laura Petrie gave way to smilingly determined career girl Mary Richards, then moved on to tense and very complicated women such as Beth in Ordinary People and real-life criminal matriarch Sante Kimes in Like Mother, Like Son. But who was the real Mary? Probably all of the above, but we’ll never know.

Here, as Patrick Dalton, a naturalized U.S. citizen running for Congress, we see flashes of the Dudley Moore charm and humor that made him a box office favorite in all those zany 1980s comedies. But his exuberance too, of course, is sobered by the sadness of the film’s grave situation, as he befriends the adoring young girl who joins his campaign and then discovers her tragic secret.

Tyler Moore and Moore make an awkward Mutt and Jeff couple and were criticized as having zero chemistry. Indeed, tall Mary towers over diminutive Dudley and there is little va va voom in their coupling, but this is not meant to be a hot and heavy romance. It’s a love story of three soulmates who have a very short time together, a brief moment of joy before the tragedy that pulls them apart.

Katherine Healy, a real-life Olympic skating champion (who ironically pretends awkwardness on the ice in a scene at Rockefeller Center) and fledgling ballerina, plays the role of young Nicole Dreyfus. To date, this was her first and last film role, which is unfortunate, because she is effective here.

Though she, the film and her costars were savaged by the critics at the time, Healy is completely believable as the self-possessed and mature-beyond-her-years thirteen year old who has a lot of living to do before leukemia and the fates spirit her away. Today, Healy continues to teach dance, as she has done for many years.

Granted, the film is somewhat maudlin and overly sentimental, but what tearjerker isn’t? It’s also filled with implausibilities that make it difficult to suspend disbelief—in what universe does even a poor little rich girl get the chance to dance in a New York City ballet and preside over the mock wedding of her mother to her new idol and hero?

Admittedly, MTM’s angry, sobbing meltdown as she reveals that her daughter is dying of leukemia, and the harrowing scene in the subway where the girl collapses (after her triumphant performance in The Nutcracker) do go over the top. (But why are those my favorite parts?)

The scene where mother and daughter dance together is lovely and memorable.Though no prima ballerina herself, Mary performs with grace and skill, using the dance as the opportunity to shower unrepressed affection upon her daughter during this shared moment of joy. MTM fans will recall that she started her showbiz career as Happy Hotpoint, the dancing elf of appliance commercials, as well as her musical moments with TV hubby DIck Van Dyke and tap dancing in the elevator with Julie Andrews in Thoroughly Modern Millie.


Coincidentally, some of the tragic elements of the story—debilitating illnesses and the loss of a child—resonate with the personal lives of the principals. Mary had just recently suffered the loss of her only son, Richie, in a 1980 handgun accident. She was a lifelong insulin-dependent diabetic who also braved a decades-long bout with alcoholism. But she endured and continued to work on and off until her death at the age of 80 in 2017.

More than a decade after Dudley Moore made Six Weeks, he would be plagued by a series of serious health issues, including heart disease and Parkinson’s, sidelining him from show business until director Barbra Streisand took a chance and offered him a small supporting role in The Mirror Has Two Faces. Sadly, Streisand reluctantly fired him when it became clear he was not up to the task, and he was replaced by Austin Pendleton. He died in 2002.

The earnest performances make this movie watchable, and are accompanied by a moving original piano score (composed by Dudley Moore himself) designed for eliciting tears. So if you are in the mood for good cry (and a few rolls of the eye)—as many of us are during the holidays!—you may actually enjoy Six Weeks as much as I do.