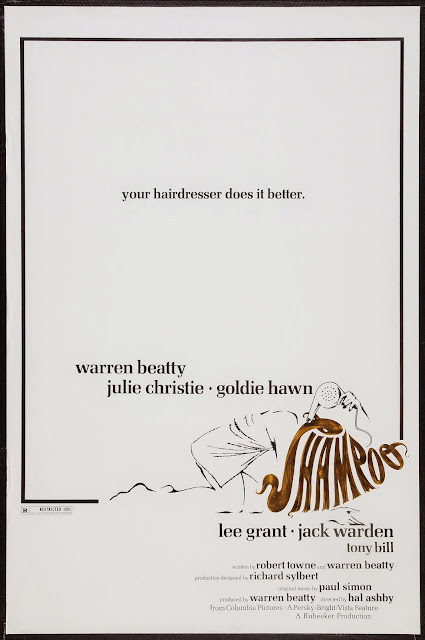 Made in 1975, just months after the Watergate scandal resulted in the resignation of President Richard Nixon—a time of cynicism, escapism and hedonism in America—Shampoo takes place in Los Angeles (chiefly in the neighborhoods of Beverly Hills and West Hollywood) on election night in November 1968, as Nixon is poised to win his first term as President.


The sexual revolution sparked by the tumultuous 1960s was still going strong in Hollywood well into the 1970s, which makes this film’s 1968/1975 time warp plausible—the specter of AIDS was almost a decade into the future. It was an era where trashy novels like Joyce Haber’s The Users and Judith Krantz’s Scruples delved deeply into the (supposedly) secretly perverse lifestyles of Hollywood’s rich and famous. Shampoo reflects and exploits that mid-70s sexual obsession to satiric and titillating comic effect.

Reportedly Warren Beatty and screenwriter Robert Towne became BFFs while collaborating on the script for Shampoo, apparently finding they had quite a bit in common. Their rumored kinky sexual predilections included making love to their respective female dates on double beds in the same hotel room, thereby satisfying both their shared voyeuristic and exhibitionistic tendencies. (Later, Beatty and Towne would also share a Best Original Screenplay Oscar nomination for Shampoo.)


The film covers a day and night in the complicated life of a free-spirited Beverly Hills hairdresser and Lothario, played of course by Warren Beatty. Warren’s portrayal of the womanizing yet guileless George Roundy is spot on—and why wouldn’t it be?  The subject of Carly Simon’s iconic song “You’re So Vain” (You had one eye in the mirror/as you watched yourself gavotte”), Beatty is cashing in on his own legendary offscreen image as playboy of the western world. Back in the day, the stories of Warren Beatty’s prowess with the ladies was mythic and epic in its proportions, and there were few famous women of the era—from Natalie Wood to Barbra Streisand—who had reportedly not succumbed to his charms.

Far from a cold and calculating Machievellian Casanova, George is a vague, foggy airhead (Beatty is an Aquarius, by the way), a not-very-bright “himbo” who’s a pushover for a pretty woman and seems to fall into his constant sexual conquests almost entirely by default.


Beatty’s George is a peacock, hot stuff indeed as dressed by costume designer Anthea Sylbert.  In his tight blue jeans (often found down around his ankles), white pirate and tuxedo shirts unbuttoned almost to the navel, chunky silver belt and turquoise jewelry, with a few gold chains thrown in for good measure, George is an establishment hippie rebel, riding his motorcycle through the Hollywood Hills with nonchalant cool, brandishing his holstered hairdryer like a gun, his overgrown, tousled “bed hair” blowing in the breeze.

But Beatty imbues his insouciant womanizing protagonist with his own brand of sweet masculine vulnerability, the kind women find irresistible. Inarticulate, unable to describe his feelings or his life with any other word than “great,” George nevertheless has his troubles, experiencing guilt and regret and feeling like a failure in life, not proud of his obsessive promiscuous behavior. “Let’s face it,” George finally admits to Goldie Hawn’s character with weary resignation, “I f*cked them all.”


Goldie Hawn, Oscar-winning Best Supporting Actress for 1968’s Cactus Flower, parlays the zany, kooky persona she perfected on TV’s Laugh-In (“Sock it to me!”) into a brilliant tragicomic performance. As Jill, George’s current main squeeze, pretending not to notice that her boyfriend is a notoriously promiscuous cocksman, Goldie is simultaneously hilarious and touching. She scores in scenes that include a hyperventilating panic attack, vain attempts to get a straight answer about George’s whereabouts, and displaying dumb blond naivete as she undergoes a modeling interview with Tony Bill (who later directed the charming My Bodyguard).

Veteran character actor Jack Warden scores in his role as middle aged Beverly Hills businessman Lester Karpf, who keeps a younger woman in a love nest off Mulholland and tortures his hair forward to cover his balding pate. Beatty and Warden have marvelous chemistry in their scenes together in which hairdresser George (with a a few subtly mincing gestures and breathy tone of voice) allows Lester to believe that he’s gay to cover up the fact that he’s sleeping with both Karpf’s wife (Lee Grant) and his mistress (Julie Christie). Warden would cop an Oscar nominee for Best Supporting Actor, and the pair would work together again in Beatty’s next picture Heaven Can Wait.


Julie Christie is memorable as Jackie, Lester’s mistress and ex-lover of George, a glamorous but tense gal with a drinking problem, still holding the torch for her former boyfriend. The beautiful and versatile Christie, who had achieved iconic superstardom as Lara in Doctor Zhivago and won the 1965 Best Actress Oscar for Darling, was Beatty’s costar in McCabe and Mrs. Miller and had recently been his longtime paramour and domestic partner. (Long before Annette Bening came on the scene, Christie had been the odds-on favorite to get the notoriously marriage-shy Warren to the altar.)

Two years before she shot to stardom as Princess Leia in Star Wars, Carrie Fisher gives a sardonic portrayal of the Karpfs’ nubile teenage daughter Lorna, who taunts George into proving he isn’t homosexual, just to make her mother crazy. In the scene with Beatty, Fisher vehemently protesting “I’m nothing like my mother” has added dimension when you know that Fisher is the daughter of establishment, G-rated movie star Debbie Reynolds. (Lee Grant’s real-life daughter, of course, is the talented Dinah Manoff of Grease and Ordinary People fame. And incidentally, another movie star progeny,  Andrew Stevens—son of Stella—has a bit role with plenty of exposure in the grotto skinny dipping sequence with Jack Warden.)

Grant’s long and storied career, which has spanned seven decades, included the dark period in which the young actress, and many other artists were summarily blacklisted from the Hollywood film industry, branded as un-American subversives in the shameful McCarthy Communist witch hunt of the 1950s. A determined Grant would come back with a vengeance in the 1960s, no longer an ingenue, but now a skilled character actor in dozens of memorable roles, on television (Peyton Place), and in film (Valley of the Dolls, In the Heat of the Night) over the next half century.

The prolific Ms. Grant, who had been nominated for Oscar in 1951 for Detective Story and in 1971 for The Landlord, finally won the Best Supporting Actress Academy Award for her brilliant performance here. She would receive an additional Supporting Actress nod for Voyage of the Damned the next year. In the 1980s, Grant expanded her resumé, becoming an acclaimed documentary filmmaker, garnering praise for directing the groundbreaking transgender documentary What Sex Am I? before winning her second Academy Award for Down and Out in America, while continuing to take occasional acting roles.


Shampoo is a delicious romp for its talented ensemble cast, set against the backdrop of 1968 Southern California. The hippie chic, psychedelic Hollywood party sequence is replete with skinny dipping and LSD-spiked punch and a cameo appearance by Michelle Phillips of the Mamas and the Papas, as the newest Beatles album (Sgt. Pepper, of course!) blares in the background. George’s hairdos for both Lee Grant and Julie Christie resemble Barbra Streisand’s 1968 Funny Girl bob— and in the Bistro black tie sequence, Lee Grant even wears a sailor suit, in another Streisand homage from costume designer Sylbert.

Punctuated by mournful Paul Simon music (a few years later, Carrie Fisher would become Mrs. Paul Simon), the soundtrack also includes hits that topped the charts in 1968, including “Wouldn’t It Be Nice” by the Beach Boys and “Sgt.Pepper’s Lonely Hearts Club Band” and “Lucy in the Sky With Diamonds” by the Beatles.

The Criterion Collection has recently added Shampoo to its roster of digitally restored and beautifully presented blu-ray films, so we can enjoy it in all its lush, remastered 4k glory when it is released in October 2018.

For even more on this marvelous movie, visit the fabulous Le Cinema Dreams blog here.

Thanks so much for reading this entry in the Lovely Lee Grant Blogathon, cohosted by my friend Gill at ReelWeegieMidget Reviews. Can’t wait to delve into our sizable blogroll and read everyone’s posts! 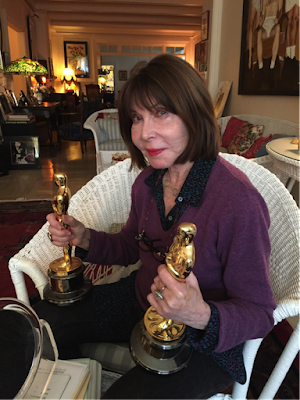