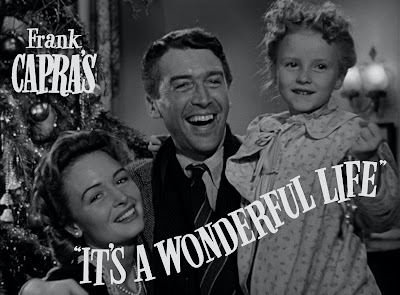 Frank Capra’s classic It’s a Wonderful Life is a yearly holiday tradition for me; I faithfully watch it every Christmas Eve. As someone who often suffers from melancholy and sadness during this supposedly joyful time of the year—and I know I am not alone—I look forward to this film as an annual year-end experience of personal catharsis and healing.

The hero’s journey taken by protagonist George Bailey, played with such natural grace by the great James Stewart, has a lot in common with the odyssey each and every one of us takes year after year in real life, with its fears and shadows as well as magical little moments of love and joy.

Life is hard and filled with challenges for everyone, rich and poor alike. How Stewart’s George Bailey handles the slings and arrows is real, imperfect, heartbreaking, but ultimately an enlightening and redemptive experience. 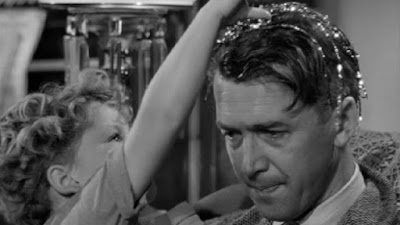 Nominated for five Academy Awards and cited by the American Film Institute as one of the 100 best American films ever made, with beautifully written script by Frances Goodrich and Albert Hackett (Diary of Anne Frank, Father of the Bride) and directed by the great Frank Capra (It Happened One Night, Mr. Deeds Goes To Town), It’s a Wonderful Life is about as far from a lighthearted holiday romp as you can get. It is a very dark and disturbing tale of suicide and bankruptcy and broken dreams. Indeed, it was a box office failure when it first premiered during the 1946 holiday season.

But at the film’s climax, the darkness and cynicism give way to light and hope—director Capra gives his audiences a heartwarming conclusion that has the power to rekindle even a long burnt-out faith. Often accused of over-the-top sentimentalism, Frank Capra’s steadfast idealism is as relevant and practical today as it was in post-WWII America. Little things like kindness and gentleness don’t just mean a lot, they are everything.  And we need happy endings.

The story is iconic. On Christmas Eve, a discouraged and desperate small town man is at the end of his rope. A miraculous series of events changes his life and attitude forever.  At the apex of the story is the character of George Bailey, played by James Stewart.


Stewart was 38 years old when he made It’s a Wonderful Life in 1946, but believably plays the character of George over a span of nearly 20 years. He had already been a top Hollywood star for more than a decade, having won an Academy Award for his role as the sardonic yet bighearted Macaulay Connor in The Philadelphia Story in 1940.

Beloved by movie audiences as an everyman, (indeed, he had already proven himself the ideal Capra leading man in the title role of Mr. Smith Goes to Washington), Stewart was the perfect actor to bring to life the flawed character of small town denizen George Bailey, acting as a stand-in for every audience member who ever felt trapped in his or her own life, cheated of dreams that did not come true despite their best efforts.

Stewart’s Oscar-worthy performance was recognized by the Academy, and he deservedly received one of his five Best Actor nominations for the role of George Bailey. It was the actor’s most mature and intense work to date, and served as a gateway to more serious mature roles to come, including four Hitchcock classics culminating in Vertigo.


As the wise director did in all his great films, Capra surrounds his leading man with a brilliant ensemble of skilled character actors who bring the story to vivid life with their unforgettable performances. Lionel Barrymore (Dinner at Eight, Grand Hotel), eldest of the famed acting dynasty, brother to John and Ethel and great uncle to Drew, is evil personified as the cruel and miserly Mr. Potter; Henry Travers (The Bells of St. Mary's) has a scene stealing turn as Clarence the angel, adding a bit of humorous leavening to the proceedings; Thomas Mitchell (Gone With the Wind, Pocketful of Miracles) is dotty Uncle Billy, and Beulah Bondi (Make Way for Tomorrow, Tammy and the Doctor) is George’s sweet mother. Lovely Donna Reed (From Here to Eternity), is, of course, perfect as George's faithful wife.

I’m not usually fan of young actors portraying the star in flashback, but the device works well here in the prologue, where Young George played by Robert J. Anderson (The Bishop's Wife) is responsible for my first flood of tears, when his ears are boxed by a drunken, grieving H.B. Warner (King of Kings).


All the great actors’ fine moments in this film are too numerous to mention, but Ward Bond, Gloria Grahame, Sheldon Leonard, Lillian Randolph, Frank Faylen and Todd Karnes each contribute to the iconic moments that tug at the heart and make us smile.

At the center, though, is James Stewart’s intense and complex performance as the conflicted George Bailey. Despite George’s heart of gold, his easy charm, sense of humor, kindness and generosity, the odds seem stacked against him and his gradual descent into bitterness and despair takes the audience on a journey into their own souls, their own gallery of deep disappointments and unrequited desires. 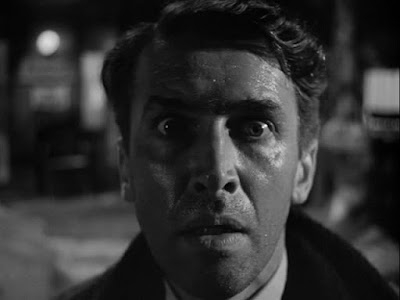 The moment near the end of the picture where George bows his head and prays, sobbing “I want to live again” triggers the same reaction in me year after year; I am choked up and awash with tears, every time, never fails. Perhaps it’s my way of letting go of the frustrations and disappointments and pain of the previous year and facing the new one with some hope and optimism, grateful to have friends, family, a roof over my head, etc.

For me and millions of others, It’s a Wonderful Life provides an annual ritual of release, a good cry that leaves us feeling happy, refreshed and ready to face the world anew as the New Year dawns. That’s more than enough to make James Stewart, Frank Capra and company inspiring heroes in my book.

This blog is part of the Inspiring Heroes Blogathon hosted by The Midnite Drive-In and Hamlette’s Soliloquy. Happy holidays, and best wishes to all for a joyous new year.
Posted by angelman66 at 3:17 AM