A Dramatic Rendering of A Remarkable Diary 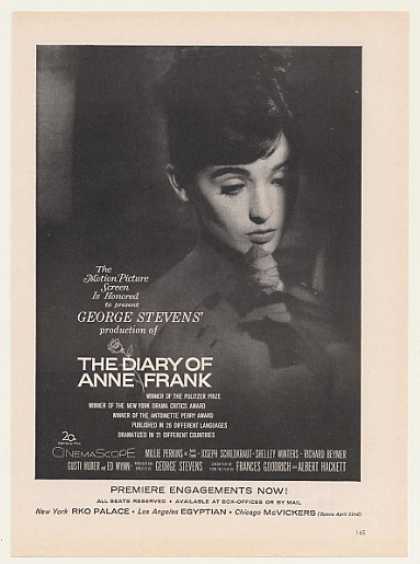 Holocaust survivor Otto Frank said, “There are no walls, no bolts, no locks that anyone can put on your mind.” Despite the efforts of others to dehumanize fellow human beings and rob them of their lives and dignity, the spirit of freedom persists, through art, through imagination, through self-expression.

The story of Anne Frank is now legendary. As Hitler’s armies marched into the Netherlands in 1942, Jews were forcibly taken from their homes, their possessions and property confiscated, and put on trains to death camps, where millions perished. Anne Frank’s family and a group of neighbors were given the opportunity to hide in a secret annex and wait out the war.

Through the courage of Kraler and Miep, dear friends who risked their own lives to help, the group were given just a few precious months in a small attic apartment atop the factory that had been Otto Frank’s place of business. It is through the journal of Otto’s youngest daughter that the world was told this now iconic story. (All the residents but Otto Frank himself died in concentration camps.)

The diary had been a bestseller since it was discovered and published after the war, and adapted into a Pulitzer Prize-winning play in 1955 by veteran screenwriters Frances Goodrich and Albert Hackett, best known for their tender, seriocomic family films It’s a Wonderful Life and Father of the Bride and the musical classic Easter Parade. The Hacketts adapted the stage play for the screen, to be directed by George Stevens (Giant, The Greatest Story Ever Told).


Director Stevens, who during WWII had filmed the ravages of war including the horrors of Nazi concentration camps where millions of Jews were exterminated, was moved by the story of the little girl whose family had been forced to flee and hide, and brought the hit play to the screen in 1959.

Stevens assembled a brilliant cast to play the roles of the terrified Dutch Jews forced to go underground and hide themselves from their Nazi persecutors in a hidden attic room.

In a way, director Stevens was a chief mentor to legendary actress Shelley Winters, helping her develop into the skilled actor she would become under his direction in two key film roles. Winters had worked with Stevens on A Place in the Sun in 1951, the film that evolved her image from that of B movie glamour gal to respected A-list character actress. Her role as the doomed, plain factory worker Alice Tripp, who falls in love and becomes pregnant by Montgomery Clift, won her an Oscar nomination for Best Actress.


In A Place in the Sun, she had completely changed her physical appearance, and the buxom, brassy blond became the mousy, timid Alice. For Diary of Anne Frank, Stevens called upon Winters to transform her appearance once again, to become the zoftig middle aged Petra Van Daan, wife of a well-to-do Jewish businessman and mother of a teenage son. (Winters later complained that by gaining weight for the role, she destroyed her metabolism and indeed suffered from a serious weight problem for the rest of her life.)

Shelley won her first Oscar for the role of Mrs. Van Daan, which she donated to the Anne Frank house in Amsterdam, where the real-life drama had actually taken place. (In addition to Best Supporting Actress Shelley Winters, the film won Oscars for cinematography and art direction, and was nominated for best picture, costume design and supporting actor Ed Wynn.)


Wynn, best remembered as the tipsy levitating floating uncle of Mary Poppins who sang “I Love To Laugh,” gives one of his most complicated performances as the eccentric, bewildered old dentist who never considered himself a Jew and now finds himself in an uncomfortable position.

Of course, the most difficult role to cast would be Anne Frank herself. Far from a saintly martyr, the Anne of both the book and the play is cruel to her mother and talks back to her elders, wild, willful, playful and imaginative.

On Broadway, Susan Strasberg had triumphed in the role of Anne. Daughter of legendary Actors Studio founder and teacher of the Stanislavsky Method (Marlon Brando, Marilyn Monroe, Julie Harris and Jane Fonda were among Strasberg’s most famous students), Susan Strasberg had already proven her cinema worth with an impressive performance in the film version of Picnic.


But George Stevens chose not to cast Strasberg after seeing her play the role on stage, though he did  cast Joseph Schildkraut (who had won a Supporting Actor Academy Award for Life of Emile Zola in 1937) Oscar and Austrian actress Gusti Huber from the Broadway production to play Anne’s parents.

Instead Stevens chose lovely and photogenic newcomer Millie Perkins to play the complicated title role, the willful, imaginative, fun-loving soul whose exuberance and restlessness pose a risk to the denizens of the hiding place. Among the ensemble of powerhouse actors, Perkins holds her own, although she received mixed reviews for her portrayal at the time.

She would go on to a relatively undistinguished acting career—the other highlight of her filmography is Wild in the Country opposite Elvis Presley—basically disappearing from the screen by the mid 1960s, later to reemerge in character roles, usually as someone’s mother.


As Anne’s older sister Margot, Diane Baker is warm and wise, the image of her mother (while Anne is passionate and curious, like her father). 1959 was an important year for Baker, who also shined in the all-star Technicolor soap opera The Best of Everything with Joan Crawford, Hope Lange and Suzy Parker. Baker would enjoy a long, fruitful career as an actor in films and television, and years later would memorably play the senator mother of one of serial killer Buffalo Bill’s intended victims in Silence of the Lambs.

Handsome Richard Beymer, who would go on to star opposite Natalie Wood in the big budget screen adaptation of West Side Story (both were beautiful; neither could really sing), plays the role of shy Peter, son of the constantly bickering Van Daans. Embarrassed by his parents’ sturm and drang, Peter retreats to a quiet corner with his orange tabby cat Mouschi before being befriended by Anne and Margot. (When Beymer’s brief stint as male ingenue was finished in Hollywood, he continued to find regular work in television, notably on the quirky cult series Twin Peaks.)

Veteran character actor Lou Jacobi (Irma La Douce) lends strong support as the tense and high-strung Mr. Van Daan, whose appetites for chain smoking and overeating cause tension in the attic household of strangers. Douglas Spencer and Dody Heath, as Kraler and Miep, are properly stalwart as the brave accomplices who stash them in the annex and share their guilty secret, bringing food and news, and hope.

Fans of fine acting and stories based upon real-life events will enjoy both the epic sweep and intimate storytelling of Diary of Anne Frank. Filmed in moody black and white, and eliciting both tears and laughter, this timeless story continues to provoke thought about the complexity of the human condition and whether peace and understanding can ever really be achieved. “In spite of everything,” wrote young Anne, “I still believe people are good at heart.” 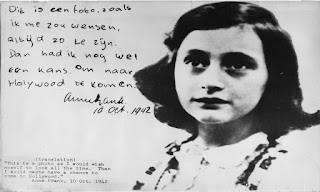 Thanks so much to the lovely Realweegiemidget Reviews and Poppity Talks Classic Film for hosting the Shelley Winters Blogathon. I look forward to reading all the posts on one of our greatest classic stars! 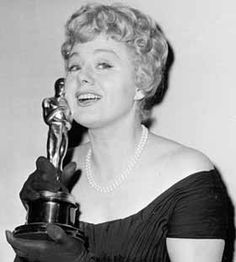