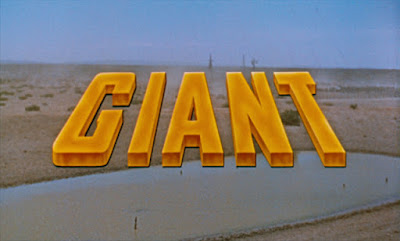 My sister and her family recently moved to Dallas, so I’ve had the opportunity to visit there a couple of times. I had a blast there, and confirmed for myself the old aphorism that “everything’s big in Texas”: big guns, big food, big hair, big smiles and big Southern hospitality. And, of course, big pride for a great state that was once the biggest in the union.

The 1956 film Giant captures the expansive spirit of the Lone Star state, and in fact probably had a lot to do with creating that Texas mythos that still endures today. The aptly-named film is epic, sprawling and grand, Giant in every respect. From the majestic strains of Dmitri Tiomkin’s powerful score, to cinematographer William C. Mellor’s moody lighting, big skies and Texas sunsets, to George Stevens’s skilled direction of some of the most talented and legendary actors on the planet, Giant is more than a movie; it’s a force to be reckoned with—not unlike the state itself.


Based on the 1952 historical novel by Edna Ferber (Show Boat, So Big), Giant is several movies rolled into one—a multi-generational saga of the fictional Benedict dynasty; a boy-meets-girl/battle of the sexes romance; a political soap opera, and a modern Western. Director Stevens (The Greatest Story Ever Told, A Place in the Sun) seemed to include every detail of Ferber’s 400-page tome up there on the screen in the film’s 3 hour and 21 minute running time.


The film captures the spirit and flavor of Texas, with its frequent historical references to Carrie Nation, San Jacinto and the Alamo, and Tiomkin’s score is peppered with the familiar folk tunes including “The Eyes of Texas Are Upon Us” and of course “The Yellow Rose of Texas.”

Giant delves into politics as well, exploring Texas’s uneasy relationship with Mexico (which continues to this day) and Texans’ poor treatment of the Mexicans who serve them. Both rich and poor Texans (Bick Benedict and Jett Rink) are prejudiced against the subservient people they call “wetbacks,” while an enlightened newcomer (Leslie Benedict) shows them kindness, generosity and compassion.


Nominated for 10 Academy Awards, the most at the time since Gone With the Wind (to which it is often compared), George Stevens deservedly won the Oscar for Best Director that year.

Unlike GWTW, which was filmed completely on a studio backlot, exteriors of Giant were filmed on location in the western town of Marfa, where the townsfolk became extras and bit players in the film and rubbed elbows with Jimmy, Rock and Liz, attending the daily rushes at the local movie house and enjoying after-dinner musicales at the town’s only hotel--enjoying their fleeting five minutes of fame before settling back down into obscurity. (The 1981 play and film Come Back To the Five and Dime, Jimmy Dean, Jimmy Dean provides some imaginative fictional backstory on the location filming of the classic.)

Giant boasts unforgettable performances by three of Hollywood’s biggest stars, supported by one of the most accomplished and talented casts in film history.

Elizabeth Taylor received top billing as the steely Leslie Benedict, loving matriarch of the rowdy Benedict clan. Director George Stevens had been among the first to nurture the latent talents of the violet-eyed sensation, whom he had cast as socialite Angela Vickers in A Place in the Sun several years before. As the object of Montgomery Clift’s obsession, Taylor had turned in a subtle and unexpectedly multilayered performance. Thus Stevens saw more in Elizabeth than just a pretty face and figure, taking the child star-turned-glamour girl seriously as an actress.

In recent years, Taylor had had almost no opportunity to sharpen those budding acting chops during her indentured servitude at MGM, who usually cast her as arm candy for stars like Van Johnson and Robert Taylor in dull melodramas. A sparkling performance as Spencer Tracy’s daughter in Father of the Bride was an exception, but high spots like that had been few and far between. Giant was a turning point in Taylor’s career.


For Giant, Taylor and costars Rock Hudson and James Dean would all be required to age more than 25 years over the course of the epic saga, believably playing the older generation to film newcomers Carroll Baker and Dennis Hopper, who were around the same age as Dean himself (he was 24 at the time). Rather than employing rubber prosthetics and over-the-top age makeup, Stevens wisely chose to suggest the future maturity of his young stars with a bit of silver in their hair and a few lines around the eyes and mouth. (Jimmy would never live to see his 50s, of course, and both Rock and Elizabeth aged a little bit less gracefully than their Benedict counterparts.)


Though Taylor did not receive an Academy Award nomination as Best Actress for her role of Leslie Benedict, Giant opened that door and served as a transition to important adult roles. She would be nominated for the Oscar the next four years running—for Raintree County, Cat on a Hot Tin Roof, Suddenly Last Summer and Butterfield 8, which finally won her the coveted statuette. (She would win a second Oscar six years later for Who’s Afraid of Virginia Woolf.) In 1970, Taylor would work with director Stevens one more time, appearing opposite Warren Beatty in The Only Game in Town, but the film would not be a success.

For Rock Hudson, Giant was a career milestone and elevated his status from leading man to superstar after lending broad-shouldered support and bolstering the sex appeal of stars like Jane Wyman (All That Heaven Allows, Magnificent Obsession). As Jordan “Bick” Benedict, Hudson would receive his first and only Academy Award nomination as Best Actor. (Both he and costar James Dean, who was nominated posthumously, would lose to Yul Brynner as the iconic king of Siam).

East of Eden had made moody James Dean the new Marlon Brando, and the soon-to-be-released teen melodrama Rebel Without a Cause would forever change the trajectory of the apple-pie 1950s, partially because of the untimely death of its star on September 30, 1955, just 10 days after he finished his work on Giant.  In this his third film, James Dean solidifies his image as the symbol of tortured youth as surly yet vulnerable ranch hand Jett Rink. In contrast to handsome leading man Hudson, Dean is all animal magnetism and overt sexuality in tight-fitting blue jeans and shirt unbuttoned to the waist, skulking round Reata Ranch wearing his cowboy hat over his eyes.

James Dean was not the only Method actor on the film. The same year as Giant, Carroll Baker stunned Hollywood with her portrayal of Elia Kazan’s Baby Doll, and would later reinvent herself as a blond bombshell in the mid 1960s with Harlow and The Carpetbaggers. (At this writing, Ms. Baker is one of two surviving members of the principal cast.) Dennis Hopper, best friend of James Dean and his recent costar in Rebel, displays his own brand of vulnerability and sensitivity as young Jordie Benedict.


The imposing Mercedes McCambridge, who had won an Oscar for All The King’s Men and tussled with Joan Crawford in the western Johnny Guitar, also earned an Oscar nod as tough-as-nails Benedict sister Luz, who rules the roost and wears the pants—indeed, James Dean’s character refers to her as “Madama.”

Child star Jane Withers (still with us and age 94 as of this writing) is the garrulous girl Hudson left behind to marry Taylor, while a young Rod Taylor (The Birds) plays Elizabeth Taylor’s spurned fiance. There’s also a tiny but memorable cameo role by sad-eyed Sal Mineo, who had such great chemistry with Dean in Rebel Without a Cause, as Mexican ranch hand turned tragic soldier Angel Obregon. Chill Wills, one of the great character actors, ubiquitous in classic westerns, lends strong support as understanding Uncle Bawley, who runs interference between the often-feuding Benedicts. 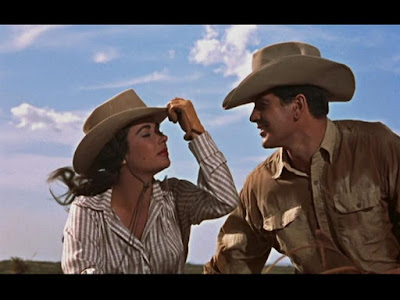 Rock Hudson and James Dean were not friendly, though they both adored Elizabeth Taylor, but rumors of a feud between the two are probably apocryphal. The two trade punches in a key scene, and there are extant photos of the pair sparring on the porch, probably rehearsing for that famous confrontation between a buttoned-up, linen-clad Hudson and a crude-oil-drenched Dean.

Despite the rumors about Dean’s fluid sexuality, the two male stars had little else in common. Where Rock Hudson learned his lines and his hit his marks with old-school professionalism, Dean the anti-establishment Method actor prepared in unusual ways, including racing around the set to keep his adrenalin pumping and his emotions high, and mumbling his dialogue using a newly acquired, authentic Texas drawl. 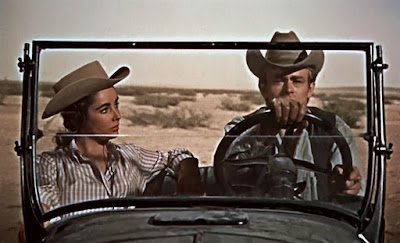 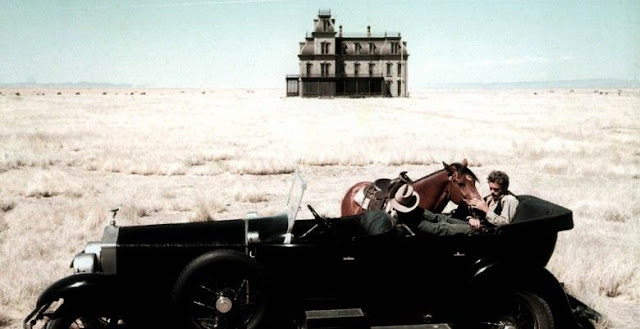 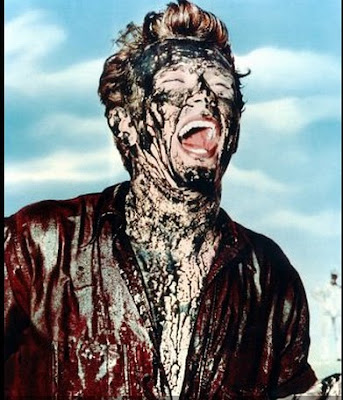 If James Dean is electrifying as the young hellcat Jett Rink of the first half, Rock Hudson provides the story’s most gripping moments in the second half. Hudson truly excels in his portrayal of the mature Bick Benedict, patriarch of the fading Benedict dynasty, a cantankerous member of the older generation flummoxed by a changing world.

Possibly the most intense scene of the picture takes place near the end in Sarge’s hamburger joint, where Bick gallantly defends the honor of his Mexican daughter-in-law and grandchild, who had been previously embarrassments to him). It’s one of Hudson’s finest moments in his 30-year career as an actor. 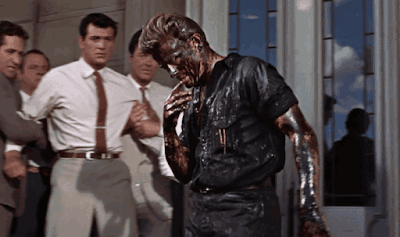 After his sudden death in a car crash at the age of 24 with only three films under his belt, James Dean became one of those iconic show business ghosts who continue to haunt us decades later, permanently frozen in time. Along with Marilyn, Elvis, Judy and Heath, his legend lives on.

Rock Hudson and Elizabeth Taylor remained lifelong friends after Giant, later reuniting on the screen in the campy Agatha Christie mystery The Mirror Crack’d in 1980. When Hudson fell ill and died from AIDS in 1986, the traumatic event was a turning point for Elizabeth, who was instrumental in establishing the AmFar Foundation to create visibility and accelerate the search for a cure or treatment for the dreaded disease. 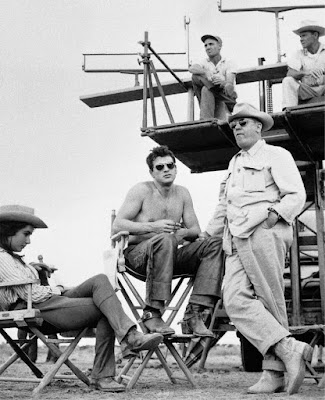 If you have a long, lazy Sunday afternoon free one of these days, I highly recommend this beautifully crafted portrait of a loving, brawling, dysfunctional Texas family. You’ll learn a lot of history along with being satisfyingly entertained, as well as the reason why they say “Don’t mess with Texas!” 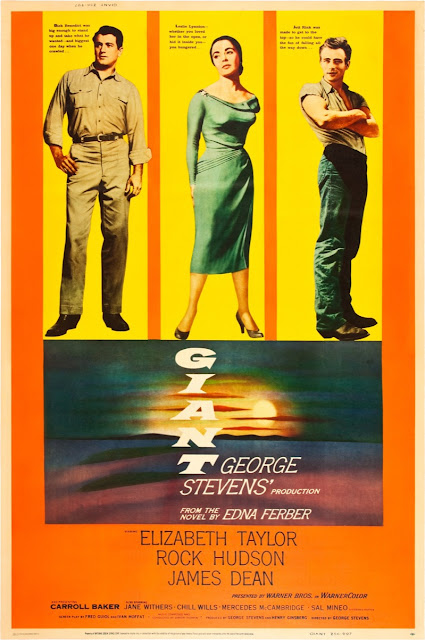 Thanks so much to Quiggy at the Midnite Drive-In for hosting this Texas movie blogathon celebration! It promises to be one of the biggest blogathon events ever, and I look forward to reading all the entries.
Posted by angelman66 at 3:30 AM