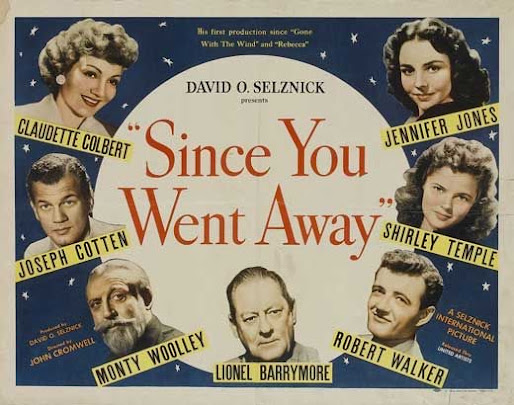 A world at war. An uncertain future, the loss of loved ones and the need to draw together for strength, comfort and joy. These are among the themes of David O. Selznick’s Since You Went Away (1944).

The effects of WW II on the collective psyche were not unlike the psychological impacts of our currently raging pandemic, an event that has beckoned us back to the cozy pleasures of hearth and home, a refuge from the dangers out there in the world.

Since You Went Away is a unique wartime tale, an intimate story with an epic sweep, its spectacle not depicting the hell of embattled war zone combat, but the quiet determination of those who kept the home fires burning. Its setting: An Unconquerable Fortress—The American Home 1943.

Episodic montages punctuate this intimate family drama to convey the toll of the war on all Americans – soldiers marching to war, bidding farewell to loved ones in crowded railway stations, dancing away their troubles at raucous USO gatherings. Church congregations seeking strength, overflowing hospital wards teeming with injured and limbless servicemen. But chiefly this is the story of the Hilton family. 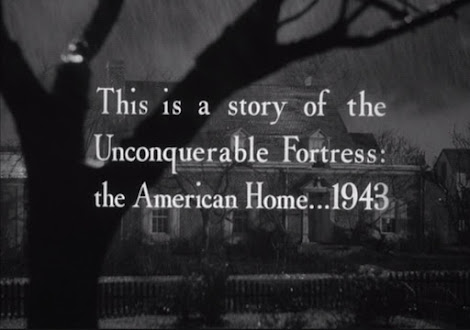 For producer David O. Selznick (Dinner At Eight, David Copperfield, Rebecca), this film was a labor of love that obsessed him almost as much as his legendary Gone With The Wind a few years earlier. He adapted the film himself (“Screenplay by the Producer” reads his modest credit), and though the film’s director is credited as John Cromwell, it is Selznick who controlled every aspect of the storytelling in his inimitable, frenetic, famously megolomaniacal style.

Here, producer Selznick assembles a cast of both veteran actors and fresh faced newcomers to create a story that is as entertaining as it is thought provoking, and the principals in the all-star cast generate plenty of star power.

Claudette Colbert is Anne Hilton, whose husband has just gone off to war, leaving her with two teenage girls to raise alone.

In her long career, Colbert transitioned gracefully from early talkie femme fatale (Sign of the Cross, Cleopatra) and madcap heroine (she won her Oscar for It Happened One Night) to the mature wise mother figure she portrays here. An unusual round-faced beauty with wide set eyes, Colbert was one of Hollywood’s most versatile actresses—equally at home wrapped in mink or luxuriating in a bath of asses' milk in Cecil Be DeMille’s ancient Rome and Egypt, or donning a helmet and combat boots as an Army nurse in 1943’s So Proudly We Hail (another essential for WWII aficionados).

David Selznick’s muse (and some say obsession) Jennifer Jones plays Anne’s eldest daughter Jane Hilton in her first starring role since her career-making, Oscar-winning turn in The Song of Bernadette.

Born Phyllis Isley and married young to fellow actor Robert Walker, Jones had been discovered, groomed for stardom and given the name Jennifer Jones by David Selznick. Selznick fell deeply and compulsively in love with her, though Jones was still married to husband Walker, the father of her two children.

And guess who plays Bill, Jones’s ill-fated love interest in Since You Went Away? None other than the cuckolded Walker. Despite the fact that they filed for divorce in mid-production of this film, Jones and her estranged husband display great screen chemistry and their romantic scenes sizzle, especially one taking place on a haymaker at a farm. It’s interesting to note that their onscreen lovemaking was being supervised by the very man who had engineered their impending divorce—and filming those scenes was reportedly tense, with Svengali overtones, no doubt.

The boyishly handsome Walker would go on to star memorably opposite Judy Garland in Vincente Minnelli’s The Clock and Farley Granger in Strangers On A Train but suffered from mental illness, exacerbated by alcoholism - he died of an accidental overdose in 1951 just after completing the Hitchcock classic.

Jones was Selznick’s inspiration but many of the productions he mounted to showcase her were misfires, including the overheated Western Duel In The Sun and ill-advised remake of A Farewell To Arms with Rock Hudson. Selznick died in 1965.

Playing Jane’s little sister Brig Hilton was a big comeback for Shirley Temple. Temple has David Selznick to thank for rescuing her from the career oblivion that most child stars experience when they reach puberty and adolescence. The top box office star of the 1930s, topping the Quigley Poll three years running, Temple was an icon of doll-like perfection, with her trademark sausage curls bouncing and tiny feet tap dancing beneath starched crinoline skirts.

Dropped unceremoniously by her home studio 20th Century Fox at the ripe old age of 11 and briefly signed to MGM who had earlier hoped to star her in The Wizard of Oz, Temple made but one film there that flopped (Kathleen). She then retired to the fashionable Harvard Westlake prep school where for the first time, she lived life as a normal teenager until she was signed by Selznick.

And that’s what she plays here, a typical WWII teenager who briskly runs the vacuum cleaner, fights with her sister for bathroom time and participates in wartime rubber and scrap drives with her shy friend Gladys.

Shirley blossomed into a lovely young woman. Since You Went Away revitalized her career and she was featured in a number of “A” pictures throughout the 1940s including I’ll Be Seeing You, Fort Apache with John Wayne and first husband John Agar, one of Clifton Webb’s popular Sitting Pretty sequels and opposite Cary Grant in The Bachelor and the Bobbysoxer. She retired from the screen in 1950, marrying businessman Charles Black and becoming involved with Republican politics, serving most notably as a diplomat as Ambassador to Ghana and Czechoslovakia.

Joseph Cotten is charming as the handsome Navy lieutenant former boyfriend of Anne and her husband Tim’s best friend, deeply in love with her yet wanting only her happiness—the one that got away. He is particularly effective when sparring delightfully with Agnes Moorehead as a vain, narcissistic and holier-than-thou matron who hoards and judges and gossips her way through the war.  (Moorehead and Cotten, of course, were longtime colleagues as members of Orson Welles’s Mercury Theater repertory company and costars in the Welles classics Citizen Kane and The Magnificent Ambersons.)

This is the film that introduced the handsome Guy Madison to movie audiences. Here, as a sailor boy who meets Jane and Bill at a bowling alley, Madison is as sweet and wholesome and appealing as a vanilla ice cream soda (which the youngsters in the film long for but can never taste because of food rationing!) Soon, he’d star opposite Shirley Temple in Honeymoon.

Madison had been discovered by Selznick casting director and soon-to-be- Hollywood super agent Henry Willson. Madison became of one Willson’s first clients in the “stable of studs” he famously amassed and built into stars in the 1950s—along with Tab, Rock, Troy and other prime specimens of “beefcake”.

Also memorably featured in the cast are Monty Woolley (The Man Who Came To Dinner) as the gruff, rigid, complicated Captain Smollett who is transformed by the loss of estranged grandson Bill in the war, and a short but powerful cameo by the legendary Lionel Barrymore as a minister who strengthens the spines of his church brethren with a rousing homily.

Oscar winner Hattie McDaniel is on hand to lend her inimitable warmth, humor and humanity to the proceedings as the aptly named Fidelia, the Hilton family housekeeper. Today, though, it’s impossible not to wince at the unmistakably racist overtones in how her character is drawn. Not only is McDaniel playing another domestic (as she did in just about every film and TV show in which she ever appeared), she’s forced to spout a stream of zany malapropisms, albeit amusingly and with perfect comic timing, that underscore her position in the world as an uneducated woman of color. As Fidelia, McDaniel rises far above her material, as all African-American performers of that era were forced to do. Dressed in contemporary stylish attire here, McDaniel exudes the same aura of fiercely protective love that she displayed in her Academy Award winning role as Mammy.  But the character sounds a truly jarring note.

Though Selznick does include a brief perfunctory glance at a black family as the father is sent off to war in one of his sweeping montages, the lack of representation is glaringly obvious when viewed today, in a film supposedly celebrating the American Way and costarring the first African-American Oscar recipient.

At turns funny and touching and somber, Since You Went Away is engrossing film fare for a long, lazy afternoon (in or out of lockdown!). Selznick’s romantic sentimentalism reaches its apex in the iconic farewell scene, as Jane runs to follow serviceman Bill’s train as it pulls away, promising him eternal love with no guarantee she’ll ever see him again. It can still bring a few tears to the eyes if you’re in the mood! 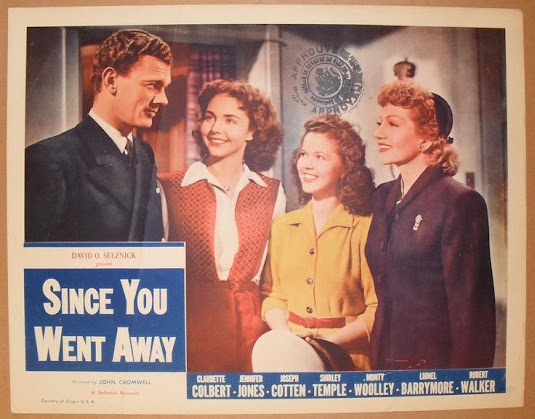 Thanks for the opportunity to participate in the Home Sweet Home Blogathon, hosted by Realweegiemidget Reviews and Taking Up Room. I look forward to reading all the entries!