The Best Actress of 1958—Auntie Roz 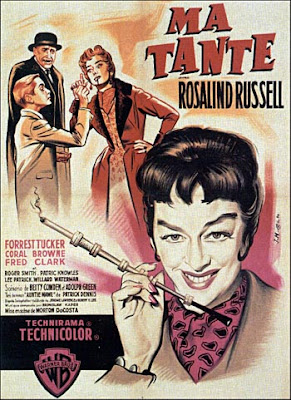 It’s absolutely incredible to me that so many of our greatest film stars never won an Oscar...Barbara Stanwyck, Cary Grant, Natalie Wood, Marlene Dietrich and Richard Burton come to mind. Rosalind Russell was nominated four times, and really should have won for Auntie Mame (1958).

In my opinion, Rosalind Russell’s iconic, bravura performance in the film adaptation of her Broadway triumph was the best performance by an actress in 1958 and should have copped her the golden statuette she had always so badly wanted to win. Though her competition that year included Elizabeth Taylor (as Maggie the Cat), Deborah Kerr, Shirley MacLaine and the winning turn by Susan Hayward (as convicted murderess Barbara Graham in I Want to Live!), the Oscar should have gone to Roz.

(Not that I don’t worship Miss Hayward; I do, but my favorite performance of hers was three years earlier, as alcoholic songstress Lillian Roth in I’ll Cry Tomorrow. But that’s another story...)


By the time she received this Oscar nomination as Best Actress of 1958, Rosalind Russell was a mature and established actress who had paid her dues and survived a roller coaster of personal and show business ups and downs. Auntie Mame was the culmination of a life’s work and the apex and high point of her film career.

Though she would headline some high-profile movie projects throughout the next decade, most notably as Mama Rose in the musical Gypsy and as the Mother Superior in the comedy The Trouble with Angels and its sequel, Russell would never again experience the heights of critical acclaim and commercial success she had enjoyed with Auntie Mame. This would be her final Oscar nomination.

She had started in Hollywood as a supporting actor, albeit a glamorous one, under contract to MGM in the early 1930s, where she was usually cast as a humorless, wealthy British heiress who would lose her fiancé (William Powell or Clark Gable) to a more charismatic or street-smart leading lady (Katharine Hepburn or Jean Harlow). That she was so often cast as a Brit was a tribute to her acting ability, as she had been born in Waterbury, Connecticut!


Russell worked hard, progressing to dramatic leading lady roles, which she found equally dull to play, so she segued into comedy character parts, triumphing in the supporting role of the gum-chewing gossip Sylvia Fowler in The Women (1939) and then opposite Cary Grant in the classic screwball comedy His Girl Friday (1940).

It was through Grant that she would meet her husband, producer Frederick Brisson. In show business circles, Brisson was snidely referred to as The Lizard of Roz for his ruthless devotion to his wife’s career, buying up the rights to books and Broadway plays out from under other stars to commandeer their roles for herself. (Ethel Merman may well have coined the nickname for Brisson!)

Russell had come so close to winning the Oscar before. She had been nominated as Best Actress in 1942 for My Sister Eileen (losing to Greer Garson in the sentimental wartime favorite Mrs. Miniver) and in 1946 playing the real-life heroic nursing nun Sister Kenny (losing to Olivia deHavilland, finally winning her first statuette for To Each His Own).

But in 1947, Russell was the odds-on favorite to win for her performance in Eugene O’Neill’s heavily dramatic Mourning Becomes Electra. It was her turn...or so everyone thought, including Russell. Legend has it that the night of the ceremonies, our Miss Roz rose from her seat as the envelope was opened and the winner’s name read. Still standing, poor Roz was mortified to realize that it was Loretta Young’s name that had been called, for the light comedy The Farmer’s Daughter. Literally thinking on her feet, Russell gamely started a standing ovation for winner Young.

Auntie Mame was her final acting nomination, though in 1973 she was awarded the prestigious Jean Hersholt Humanitarian Award, presented by her friend Frank Sinatra, for her tireless charity work. (Other recipients have included Elizabeth Taylor, George Clooney, Angelina Jolie and Debbie Reynolds.)

Mame Dennis is Rosalind Russell’s greatest and most enduring screen role, richly deserving of the Academy Award. Russell’s Mame has everything—humor, wit and hilarity; vulnerability, heart and emotion. It’s the story of a high-living Manhattan party girl whose life is transformed by love when her orphaned nephew comes to live with her, becoming the center of her universe. Through a series of comic (and tragic) misadventures, Mame imparts to Patrick her credo and philosophy: “Life is a banquet, and most poor suckers are starving to death.”

Mame’s first appearance is perhaps the greatest entrance in film history as she descends down a grand winding staircase at the height of a raucous cocktail party, trotting down the stairs at breakneck pace talking a mile a minute. All bets are off—you know you are in for one hell of a ride with this saucy dame!

Russell is the epitome of mature glamour in the ostentatious Orry-Kelly gowns that underline the flamboyancy of her character, but it’s her sheer charisma that carries this film. She is at turns wise, noble and loving, at other times as loco as Lucy Ricardo, but always every inch the grand lady. Roz commands the screen with her tour de force performance, creating a character that has become a lasting archetype in popular culture--everyone, it seems, has a delightfully off-kilter black sheep like Auntie Mame in their family.

In Auntie Mame, Russell is ably supported by a large cast of zany and lovable character actors, including Coral Browne as a drunken stage star, Forrest Tucker as a southern sugar daddy, Fred Clark doing a slow burn as Patrick’s conservative bank trustee, and best of all, Peggy Cass recreating her stage role as the shy and retiring secretary Agnes Gooch, who gets more than she bargained for when inspired by Mame’s memoir Live, Live, Live. (Miss Cass also earned a Best Supporting Actress Oscar nomination for her own iconic performance.)

As Mame’s nephew Patrick, Jan Handzlik (who also played the role on Broadway) enjoys great chemistry with Russell and allows her to show a softer, more vulnerable and maternal side to the character. (In real life, Russell was a famously doting and loving mother to her only son, Lance.) The grown-up Patrick is played by the very handsome Roger Smith, soon to become a TV heartthrob on 77 Sunset Strip before devoting himself full-time to managing his wife Ann-Margret’s career.


Auntie Mame marked something of a film comeback for Russell, who had reinvented herself as a stage star when her movie career began to flag in the early 1950s, triumphing in the 1953 Comden and Green/Leonard Bernstein musical Wonderful Town (based on her 1942 film My Sister Eileen), quite a feat since she had never sung or danced before. 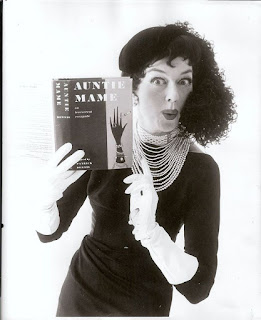 Brisson and Russell then acquired the rights to the best-selling memoir Auntie Mame by Patrick Dennis, which was developed into the hit play on which the film was based. Later, the story was adapted into the 1966 Jerry Herman musical Mame, which starred Angela Lansbury, and the 1974 musical film Mame with Lucille Ball. Russell claimed in her memoir that she had been offered the role of Mame in both the Broadway musical and the film version, but turned them down, probably wisely. (Roz’s atonal singing in the film version of Gypsy had been universally panned by critics.)

Rosalind Russell died in 1976 after a long battle with breast cancer and rheumatoid arthritis. She had undergone a double mastectomy as early as 1959, and kept her condition a secret from everyone except her costume designers. But later on she became one of the first stars to discuss her cancer publicly, in the hopes that she could help others struggling with the disease.

Though the Academy gives its Oscars ostensibly for the single outstanding performance that wins the prize, it often also awards performers for a final crowning achievement, as a thank-you for a long and brilliant career. Rosalind Russell’s Auntie Mame is worthy of that golden statue on both counts.


Thanks to my friend Quiggy at his wonderful Midnite Drive-In blog for sponsoring the Oscar Snubs Blogathon with Silver Scenes!  It's such an honor to participate!
Posted by angelman66 at 2:23 AM